Dear friends, family and neighbors,
Lot's has happened since I last wrote.  My absence has been in large part due to new job responsibilities at work (same company) which has delayed my usual outreach on different issues.  Development continues with lots of challenges in the NW part of Hoboken which made for a difficult summer.  However, with the summer over and kids have long been back at school, my dear colleague Councilwoman Carol Marsh resigned.  However, with Jim Doyle stepping into the fold, we will continue to make progress despite unrelenting attempts to derail our efforts by the others.
While there's much to discuss, first matter at hand is the City's upcoming school board elections in November.  I will have more to say about the positive direction our schools are heading as a result of changes in governance and leadership and the increased value a Hoboken public school education brings to you as a parent with children in the School District AND you as a taxpayer as well.
Some may want my opinion right off the bat (and many of you know I do support Kids First), while others may want to weigh the issues, and decide on their own.  A good balanced place to start with the latter is with general information on the Board, and the two slates running, plus an independent.  The following is from Board member Irene Sobolov, and I ask that you please give this a quick read, and familiarize yourself with the basics, and let me know if you have any questions.  Thanks and happy reading...
=========================================

The Hoboken School Board Election has officially begun. Some parents have had some questions about it, so I thought it might be helpful to describe the process.

The Hoboken Public School District has a 9 member Board of Trustee's elected by voters citywide. The terms are for three years and every year three seats are on the ballot. The HBOE = Wallace, Connors, Calabro, Brandt and HHS. The other publicly funded school districts in Hoboken are separate districts and have their own Boards, which are structured differently...for example, Elysian Charter elects their Board of Trustees from within their population (staff and parents) and Hoboken Charter and Hola appoint their Boards. All for various terms.

In this election, for the Hoboken Public School District Board, any registered voter in Hoboken can and should vote. There is no separate registration or different voting location. It will be on the same ballot as the Presidential candidates.

Since there are three seats up every year, many people run together on a ticket. (full disclosure, I ran on the Kids First ticket). There are two tickets running this year and one candidate running as an independent.

The Kids First ticket is incumbent Ruthy McAllister, Jean Marie Mitchell and Tom Kluepfel. The Move Forward ticket is Elizabeth Markevitch, Anthony Oland and Felice Vazquez.  Both tickets have a presence on the internet and both are distributing literature (see below). I don't believe Ms. Waiters has a website.
I encourage everyone to visit the websites and chat with the candidates and please VOTE. If you are not registered, you can follow the link here:http://www.hudsoncountyclerk.org/elections/default.htm
For more information, check out the candidate websites:
https://www.facebook.com/KidsFirstHoboken
https://www.facebook.com/moveforward.hoboken
Literature is pictured below...
The election is Tuesday, Nov 6th.

ps.... another question I get is about the "letters." In previous years, candidates had numbers. This year, there are letters... each candidate is assigned a letter on the ballot. KLM is one ticket NOP is another and Q is the independent. 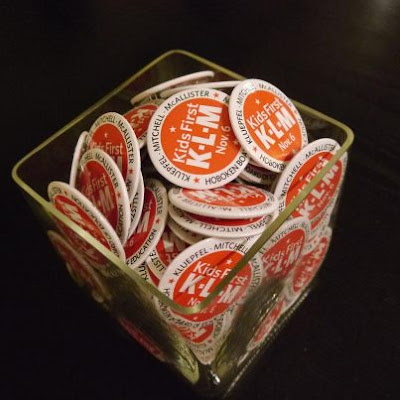