Major problems continue to erupt all over Hoboken from fires to a latest report of a transformer on fire on lower Madison Street.

- A new fire is reported on lower Willow as well between 1st and 2nd St.
- Still another reported fire on Park Ave. up past 6th St.  Verified as erroneous.
- Power lines reported down IN WATER on Grand and 13th St.
- Unconfirmed report of transformer explosion now on park above 1st street.
- Report 8th and Willow and Clinton under water.  Many new areas seeing same.

Public Safety is trying to prioritize reports to make sure responses are accurate.  Access to areas is making it difficult to verify reports.

Please remain indoors and avoid potential electrocution with power lines down all over town.
High winds will continue through the early am making for dangerous situations.

Power out in many areas of Hoboken

Reports coming in power is out in many parts of Hoboken.  Southern Hoboken was seeing a planned shutdown of power and many areas uptown report similar lack of power in the areas of the Shipyard and other uptown locations.

The Wallace School generator is reportedly out and the basement is flooding.  Problems for the shelter.

Most of Maxwell Place is looking dark but the Empire State Building soldiers on. 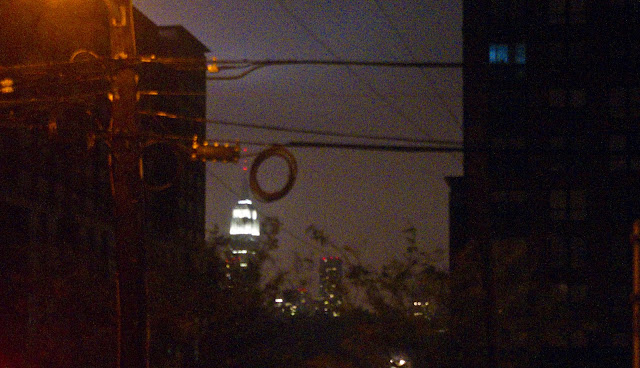 In addition to power outages, reports are that cell phone towers are also out in areas.

Mayor Dawn Zimmer has asked the National Guard for assistance.

- Police report the hospital is inaccessible.
- 2nd and Willow: a tree has fallen on power lines and is on fire.  Stay indoors!

EMERGENCY NOTICE: POWER WILL BE SHUT DOWN COVERING SOUTHERN HOBOKEN

THE CITY OF HOBOKEN REPORTS:

We are working closely with PSE&G. They inform us that the Madison St and Marshall St substations are flooded and will be de-energized (shut down) soon. Much of southern Hoboken will be without power.

Charge phones, lower temp on fridge & keep closed. There are also multiple live wires in the street. For your safety, please stay inside.


Talking Ed Note: Pass this on!

The Hoboken Police Department is reporting it has lost power.

City of Hoboken announces as of 9:45:

The City of Hoboken has experienced severe flooding in excess of the record set in 1821.
The city is working closely with PSE&G to resolve power outages. According to PSE&G the substations at Madison Street and Marshall Drive are flooded and need to be shut down. This will result in the loss of power to much of southern Hoboken.
Several wires are down and all should be considered live;
- 2nd Street and Madison Street - 89 Adams Street - 6th Street and Park Avenue - First Street and Bloomfield Street
Residents should not approach any wires or touch anything touching the wires including water. Residents should stay out of flood waters, which are a mixture of sewage and rainwater and pose a health hazard. Strong winds have brought down multiple trees and flood waters have displaced man hole covers. It is very dangerous outside so residents are strongly urged to stay indoors. A mandatory curfew remains in effect until 1 p.m. Tuesday.

For full details, view this message on the web.


An unconfirmed police rumor that criminals are attempting to organize looting using social media to create "flash mobs" after the hurricane.

UPDATES UP TO THE MINUTE HERE AND ON CITY OF HOBOKEN FACEBOOK:

Not confirmed but the reports of flooding from all corners of town likely indicates the City is facing record levels of flooding, at least in any resident's lifetime.

Please stay indoors as Hoboken Public Safety is being maxed out helping with all kinds of problems from fires, people in trapped vehicles and impassable streets making their efforts very difficult.

Power lines are down in a number of locations and is extremely hazardous.  Again, please stay indoors.


Help our Public Safety by not adding to their workload in emergency situations.

Mayor Zimmer: "For your own safety, we need everyone to be inside"

In the last hour, it has become very dangerous to be outside. Multiple power lines have come down. Roof and facade materials are detaching and flying off of buildings. A curfew is in effect from 6pm until Tuesday at 1pm. Driving within Hoboken is prohibited. Conditions are most severe along the waterfront.

Traffic signals city-wide have shut down due to a failure of transformer and substation. PSE&G has been notified and is responding as quickly as possible.

"For your own safety, we need everyone to be inside," said Mayor Dawn Zimmer. "We know this is difficult for Hoboken residents, but we appreciate that during this time so many residents are coming together to help each other through this storm."

Taking Ed Note: No surprise the worst of the storm is beginning to hit.  Pier C is halfway under water, Newark and First is seeing water backing up and the worst is not behind us.

Hoboken Public Safety is overwhelmed.  People need to stay off the streets so problems can be addressed.

For the most comprehensive information in Hoboken: See the City's Facebook:


Flooding is said to be making Hoboken "an island" with problems in areas all around town.

Washington Street has seen power lost and regained.  Expect more problems not less.
Area of 10th and Grand reports power is out, likely extending out from there.

Hoboken Cove - Tea Building: the Hudson River is pouring in and flowing to 14th St. and all streets north in-between
14th Street is being called a "moveable feast" with water from the river moving west.
Park Avenue submerged downtown below 100.
1st and 2nd street are flooded and not passable.
1st reported with flooding at Clinton, Jefferson, Grand and Adams
Observer is seeing heavy flooding
Willow is flooded north of 4th St spanning Newark through Garden St.
Madison Street and 10th going north reported "impassable" with four feet of water

Legal Beans has reportedly collapsed.  This is unconfirmed.
A tree on Willow and 7th has crashed into a home.
Fire reportedly on 13th and Hudson at the basement level.
Someone in a car on 2nd and Grand trapped with rising water.  Not smart. Hoboken Public Safety (HPD) now deploying a boat to get them out.

City is describing flooding at record levels going back to 1800's. Hurricane is looking like a picnic in comparison.

Idiots reported hanging out in Maxwell Park.  Get off the damn park!

The City of Hoboken now reports:

The Hudson River is flowing into Hoboken from both the north (around 15/16th Streets) and south, over railroad tracks to Observer Highway. If you are in a basement or street level apartment, please go upstairs now. There is major flooding and 70-90mph wind gusts.

Hurricane Sandy ramps up in Hoboken

The Police have asked people to move from Maxwell Park. This clip shows the waters moving from north to south. When Hurricane Sandy makes its full impact felt on Hoboken later today, the shift will come and then the full surge will be felt from the south. Power lines have come down in Hoboken. Please be careful and avoid being outdoors as emergency workers will attend to problems as possible.
Posted by SmartyJones at Monday, October 29, 2012

NO TRASH PICKUP ON MONDAY OR TUESDAY

There will be no trash pickup on Monday night and no recycling pickup on Tuesday in Hoboken due to the storm. Residents and businesses are asked not to place any trash on the street either Monday or Tuesday as it will get blown away and litter streets.

Downed trees can be reported through the Hoboken311 system online, and by iphone or android app at www.hoboken311.org.

Information related to Hurricane Sandy and other important relevant resources are available on the City website at www.hobokennj.org/sandy.

Driving of personal vehicles, including taxis will be prohibited in Hoboken after 4pm.

Residents are reminded to move their vehicles to higher ground, parking garages, or out of town. All of municipal garages are at capacity. The Parking Utility is closed on Monday. Parking is prohibited along Sinatra Drive between 1st Street and 11th Street, but residents may park along Washington Street, most of which is at a higher elevation. Parking meter and street cleaning enforcement is suspended on Monday and Tuesday.

As of now, parking spaces remain available at the Newport Mall Parking garage. The City will run shuttles at 11am, 12pm, 1pm, 2pm from the garage back to Hoboken to pick up residents who wish to park in the garage. Pickups will occur at every entrance along Mall Drive West.

Additional information related to Hurricane Sandy is available on the City website at www.hobokennj.org/sandy.

Sign of the Times: Not even begun and surge hits Hoboken 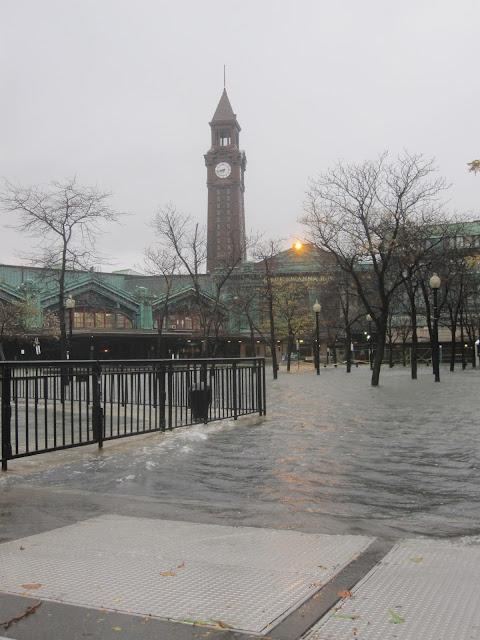 Hoboken has not even seen a heavy rainfall but the surge has already begun to hammer downtown.  This won't be good news to anyone hoping the storm was hype.  This is what our City is facing and it's only just beginning.

Last night reports said the area by the train terminal was already collecting water.  This morning the area is already completely dysfunctional.  We have a long way to go and the pump while effective won't be able to cope with what's heading our way.  Thousands have already begun to lose power in several counties.  Horse Sense is feeling it's only the beginning of what will be a rocky road.

Tonight the storm really picks up and we'll see the worst overall effects.  Problem is what comes later is a dragged out affair as the storm is moving slowly and won't be in any hurry to leave meaning things will get bad and stay that way for a while.

Be patient, help friends and neighbors and oh yeah repent.

The City has already closed Sinatra Drive.  If your car is parked there, you should try to move it out while you still can.


Talking Ed Note: Our Hoboken colleague although we've never met, Hoboken Girl has already mapped out plans for when power may go out.  While her list is novel, she's expressing a concern Da Horsey shares.  This storm is going to create havoc through the entire state of New Jersey.

If you're feeling somewhat anxious and out of sorts, you have reason to be.  It feels like the day after Thanksgiving and if you are aren't taken in with mandatory consumerism, it seems odd all around.  We're awaiting the storm to take hold and while many look to the skies, it's the storm surge coming to our shoreline that has people in the know worried.  Very worried.