City of Hoboken has just announced a special request:

Well it's getting dark and boring here with folks powering up outside the stable.

Horsey on the way!  See ya there folks.

Earlier this afternoon, Mayor Dawn Zimmer announced a disaster fund for the City.  More details and alternative means will be available to make donation but for the moment it's snail mail.

Please make out checks or money orders to:


Hoboken is a lot more than the Cake Boss and Sinatra.  All donations are appreciated!

The City is accepting donations of water and non-perishable food at the local high school at Clinton and 8th Street.  Hundreds of volunteers have been aiding in the distribution with the National Guard. 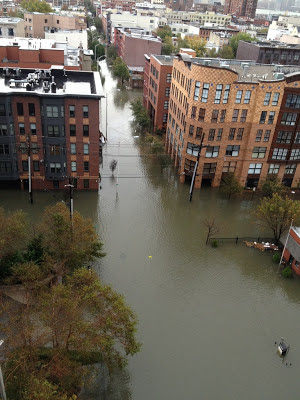 Talking Ed Note: A secondary report of a conversation with Senator Brian Stack sounded optimistic about power coming online in the next few days.  But PSE&G states there are challenges with replacing and repairing damaged equipment from the flood waters.

The power situation as a result is very fluid and the recent progress was rigged with the Hoboken University Medical Center in mind.  It's unclear how quickly the rest of the system can be brought back online due to the flooding damage.

"Hoboken’s situation is more problematic, Fitzgerald said. Its substations are still flooded, leaving about 60 percent of the city’s 30,500 PSE&G customers without power. Fitzgerald did not offer an estimate of when power would be restored in Mile Square City.

“There’s so much damage, it’s a different animal,” she said, adding that PSE&G crews will be in Hoboken Saturday attempting to rectify the problem there."
Posted by SmartyJones at Friday, November 02, 2012
Mayor Dawn Zimmer announces disaster relief fund
2012-11-02T17:50:00-04:00
SmartyJones
Comments

The Mayor will be updating residents in front of City Hall at a 2:00 PM press conference.

A tweet from PSE&G indicates Hoboken's expectations for getting back to full power may need to be tempered by required equipment replacement:

If your circumstances require you mail in your vote, the deadline to do so is end of day today.

The information comes by way of a Star Ledger story.

The emergency is making many things difficult for New Jersey and Hoboken residents among them.  If you wish to obtain a ballot by mail, you have to get the request in by end of business today.

The Hudson County Clerk's office is available to assist but without power they can't take your request beyond end of business later this afternoon.

Additional reports of power returning to parts of Hoboken is a tremendous morale boost to many in the community but PSE&G is facing a race against the clock as evening temperatures are falling to freezing in the next few days.

MSV confirmed yesterday several areas downtown were powering up in the fourth ward from lower Jackson Street and points east.  Other reported areas in midtown in the area of Church Square Park saw power coming online as well.  The vast majority of Hoboken however remains without power.

The regional fuel crisis continues to be problematic with reports it may be a week before adequate supplies are available.  One commenter on the City of Hoboken Facebook page noted this morning:

Anyone considering leaving town, please read this: Gas lines are miles long and 2+ hour waits. Also, most are restricting people to 5 gallons. The line back IN to Hoboken extends for MILES!! If you're leaving town in hopes of getting gas, you're just going to run out. Make sure you have a clear destination with enough fuel to make it there. Good luck and be safe, hopefully some normalcy will return soon.

More than one colleague has commented on the fight to keep morale up over the last few days due to the lack of power but the challenges outstanding are going to test the resolve of many in the community further in coming days.

Our Hoboken cyberspace colleague, Hoboken Girl has begun a fund for monetary donations for Hoboken at the link below:

One intrepid citizen has set up an interactive map showing useful information on Hoboken pulling back into operation.  The Hoboken Sandy Recovery Map includes updated information from twitter and the City of Hoboken Facebook page (http://www.facebook.com/Hoboken?ref=stream)  where power is back with other detailed information on power stations, markets open, etc.:

Verizon is sponsoring a power station for phones at Adams and 8th Street but the focused concentration, Power Strip Row is on Hudson from Sts Peter and Paul Church up to 11th Street.


Talking Ed Note: Hoboken Patch has been active in putting up timely, informative reports (http://hoboken.patch.com/articles/where-to-find-power-open-restaurants-in-hoboken-as-power-returns-slowly) and twitter posts through the hurricane while other local media have been limited due to the storm.  In one disturbing case, it's megalomania indifference or worse due to its political underwriter/sponsor.  Let's call it what is is: evil.

So many deserve recognition for their never say die attitude in helping this community.  Public Safety is doing a tremendous job, working to exhaustion and beyond with overtime a daily necessity.  In the end, it's everyone who has pulled together and reached out beyond themselves to others that merits recognition.

The sight witnessed yesterday on a random trip to City Hall was simply amazing.  To see so many people, especially young people from all corners of the City including Stevens students working toward a common goal was moving.

Hundreds of people have been volunteering.  The organization is impressive and more are needed and welcome.  You can register right at the front desk at City Hall - 94 Washington.


City emergency number is 201-239-6644 (city hall command center).Churches at 4th/Hudson (Sts. Peter and Paul) and 8th/Washington (St. Matthews) are open for shelters and allowing folks to charge up phones and laptops.