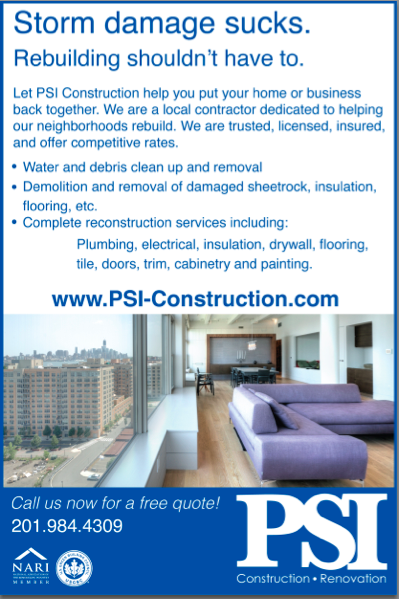 The rest of the meeting available here: http://www.ustream.tv/recorded/26974241

The City Council will be meeting for the first time since Hurricane Sandy slammed into town.  The City will be looking to approve an emergency communications contract for voice and data for the Hoboken Police Department.  It's part of the antiquated communications earmarked for improvement at City Hall with the Police communications failing before the storm arrived.

The City will seek a $700,000 emergency appropriation to deal with the cost of repair and cleanup after the storm.  Additional contracts for debris cleanup and removal are also on tonight's agenda including for the Fire Department's facilities.

Chat feature is available at the link here.

As for non-agenda items, remember those people who relentlessly insisted without ever citing any municipal finance expert that any budget surplus even a recommended 5-10% range suggested by sane financial experts was inappropriate? As many will recall the Old Guard council led by Michael Russo, Terry Castellano, Tim Occhipinti and the always feckless Beth Mason in 2011 fought viciously for a ZERO SURPLUS.

That's right when they held sway over the City before Mason got the boot in record time as council chair by the public, they fought to their bitter, lame deck deaths for a zero surplus.

How would Hoboken like to have a 10% budget surplus to work with about now?

You won't be reading about any of this at the Mason sponsored totalitarian censorship loving cyber sewer at Hoboken411.  If you were foolish enough to waste time there, you would have read about the lack of perfect planning for the storm with no useful contact information for the public whatsoever.

That almost every attempt at improving Hoboken's infrastructure via bonding has been obstructed by Beth Mason and the Council of No with not one of the four extending a sixth vote to support long term capital improvements is never mentioned.
Posted by SmartyJones at Tuesday, November 13, 2012
City Council @ 7:00 - Now the post Hurricane Sandy clean up effort
2012-11-13T15:16:00-05:00
SmartyJones
Comments

Tonight the delayed City Council meeting will take place. There will be discussion of gratitude to the first responders and the volunteers who turned out by the hundreds with calls to assist by City Hall on its Facebook page, twitter and also Hoboken Girl and Hoboken Patch.

There's a lot of credit to go around.  The City was and is in respects in crisis suffering a storm of the century when Hurricane Sandy landed a direct hit on New Jersey.

Whoever gets accolades deserves it.  Everyone who does obviously won't.  Da Horsey witnessed some of it and has heard more from others.  As one example, Councilwoman Jen Giattino saw massive damage to her home in midtown.  It didn't stop her from turning over those problems to her husband who tended to those matters with three young boys as she went out daily to assist others, mostly people who didn't live in her ward.

She did it because it was work that needed to be done.

If it wasn't cited here, it probably never would and in no way does MSV seek to diminish the efforts from countless others who put their bodies out on the streets to help in innumerable ways.

As a City, we all need to extend thanks to one another for answering the call.  The universe however is always running a tab and keeping score.

This community has done far better than others and it can be proud of the efforts of many.

MSV would like to commend them all.  Thank you for standing tall for Hoboken.