In poker, the human factor is as, if not more important in deciding the outcome of a match played among competitors. In a letter from Hoboken Democratic Chair Jamie Cryan, the world has clearly been turned upside down.  He claims Hoboken election day problems disenfranchised significant numbers of voters offering no significant evidence other than the ballet was "noisy" and there were buildings without electric power with some polling confusion elevating provisional voting.

He doesn't mention how the Old Guard extracted hundreds of votes out of the Hoboken Housing Authority on paper ballots (again) where the last thing needed is electrical power with VBMs exchanged for $50 IOUs.  Having attended the event at the Elks Club it's odd Cryan's quoting Governor Christie as no press conference took place there and MSV was in attendance at the strictly informal gathering.

This of course comes from the guy who made his election bones in Hoboken as campaign manager of the 2010 Tim Occhipinti election campaign, one of the biggest voting frauds perpetuated on the City of Hoboken.  In that fourth ward special election the Occhipinti campaign submitted almost 400 votes on questionable paper re: Vote-by-mail ballots almost all of it out of the Hoboken Housing Authority accounting for almost a full third of his vote output with 575 paid 'campaign workers.'

If there's any accounting requiring a full investigation; what's needed is State or Federal law enforcement breaking the back of the Old Guard for the abject exploitation of buying votes in the poorest part of town.  Clearly the cry you hear here is it won't be enough to disenfranchise the unpaid voters in this election - re: the rest of Hoboken.

What's more striking, Cryan cries about electronic email/fax votes but according to Hudson County only 300 were processed with several times more each in vote-by-mail and provisionals completely dwarfing that figure: (1800 returned approximately in each).  You don't hear Cryan saying VBMs should be investigated here do you?

Of course not but take heart. If the Old Guard has trotted out this letter on the Hoboken election, then it's not likely Beth Mason will be seeing much of a return on the whispered $60,000 her husband laid out to unseat the BoE grassroots campaign of Kids First.

What Hoboken is going to see when the votes are all counted is the strong resolve of the voters turned out despite the hardship of the hurricane. Cryan's letter is a tell even a novice poker player can detect.

Five days before Election Day, Gov. Christie made a bold and groundbreaking decision to allow for in-person early voting at county clerk’s offices across the state of NJ. He followed that up with an even bolder directive three days before Election Day, allowing email/fax voting of those displaced by Hurricane Sandy. Hoboken experienced massive devastation from this natural disaster and I applaud the governor’s swift and forward-thinking move.

Before Hurricane Sandy’s devastation, this was gearing up to be Hoboken’s most confusing election in our history. We were given the opportunity to vote on an incredibly full ballot, including choosing a U.S. President, U.S. Senator, U.S. Congressional Representative, Hudson County Clerk, three Board of Education Trustees, and five very detailed ballot questions. We were asked to do this without receiving sample ballots and while receiving misinformation from local elected officials telling us that all polling places had stayed the same. This created mass confusion at the polls, causing many to go to the wrong polling places, and many of these to be illegally turned away. To further the confusion, training courses for poll workers, which are required by law and usually happen months before Election Day, were canceled and too many voter’s did not receive proper guidance. This resulted in over 1,000 provisional ballots and countless voters, especially in our poorest districts, being turned away from voting.

I empathize with the county clerk’s office being swamped with fax/email requests and not being able to manage the load. But I cannot understand not following the simple requirements leading up to the election – sample ballots being sent in a timely fashion, proper training for poll workers, proper announcement of polling places, etc. I am calling for a full investigation and for those responsible for this inaction to be held accountable.

Whether or not this election brings up countless legal issues on how to count the votes, I am hopeful that our election officials will follow Gov. Christie’s clear directive, stated while visiting the Elks in Hoboken, that this election was “not to be an email election and this type of voting was for those truly displaced.” The rules called for voters to include proof on how they were displaced, and I hope our election officials follow the rules. Counting all in Hoboken as displaced except the poor and elderly is a blatant disregard for the public trust.

It’s a shame our local and county officials didn’t allow Gov. Christie to venture back to the Housing Authority or the senior buildings that were still without power on the day he visited the Hoboken Elks.

Maybe he would have agreed with Doug Kellner, co-chairman of the New York State Board of Elections, when he said (Star Ledger/nj.com; Nov. 6, 2012) that officials there concluded the risks of e-mail ballots were too great. “Especially in this type of emergency, when there’s a lack of electrical service, there’s a question of fairness for those who are on the other side of the digital divide,” Kellner said. “There are those who do not have electricity or the resources to power a printer.”

The national election has been decided. Hopefully, our local officials will call upon the county to do what’s right and protect the voices of those most in need.

Here's the link to the original letter where Cryan will be crying even more for the beating he's getting from an outraged public:

It only appears Hoboken's 2012 election will never end as the Hudson County Board of Elections tallies the various ballots uniquely deployed in this election cycle following Hurricane Sandy.

It's anticipated that ballot count for the various types of votes will be available tomorrow at some point but the final numbers are not likely before Thanksgiving confirmed just earlier.

For those curious about what Hoboken is looking at in this election, MSV can at least offer this interim insight.  Provisional ballots are unusually high being this was a Presidential year and there was redistricting adding to voter and poll worker confusion.

The Vote-by-Mail ballots returned are in the range of 1800 and provisionals are believed in the same ballpark.  On the new email/fax voting option instituted by Governor Christie due to Hurricane Sandy, Hoboken saw approximately 300 processed.

On the BoE, the three seats up in the election show all three Kids First Candidate in the lead on the machine votes with about 400 separating Jean Marie Mitchell and Liz Markovitch in third and fourth place.

The other relatively close Hoboken election issue is the rent control question where the advocates for rent control hold a lead of 531 votes (slightly more than the chart below).

Here's the official machine tallies courtesy of the Hoboken Journal: 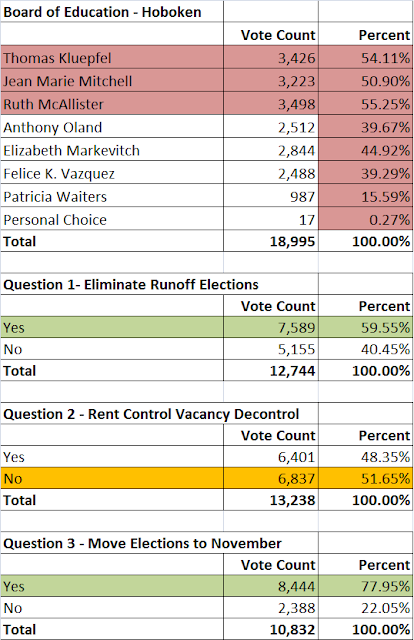 Posted by SmartyJones at Monday, November 19, 2012

Fourth Quarter taxes were due November 1st, and considered delinquent if paid after the 14th.  They are now due December 3rd.

Most actions taken last week at city council were related to Sandy.  Another temporary change of interest was to the City's noise ordinance.  Any construction related to restoration, repair and rehab as a result of Sandy can be performed on weekends.  The Construction Office will specially mark all construction permits for the above type of work only.  These temporary rules will remain in effect through December 30th.

Please pass along, and let me know if you have any additional questions.  Thanks, Peter