Based on data from the Hudson County Board of Elections, here's the remaining votes to be tabulated before certifying the official results.

A total of 1670 provisionals were submitted and of that total 328 are void or not registered.
The total figure of provisionals to be tabulated after final review is about 1291.

Among the email and fax electronic votes, the submissions are being evaluated to ensure none are double votes.  In the end, it's estimated 250 to 300 will be added into the final tally.

After these votes are confirmed, the numbers will be finalized after the holiday.

Hoboken is OPEN FOR BUSINESS 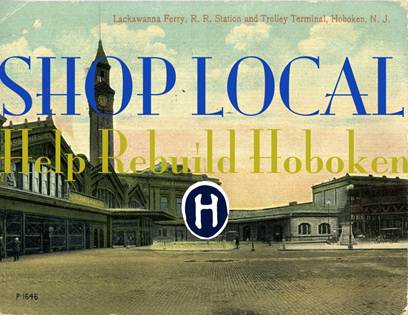 Hoboken’s businesses are overcoming the effects of Hurricane Sandy and re-opening their doors. As of today, 97% of Hoboken’s 433 retail food establishments have re-opened and passed inspection by the Hoboken Health Department.

“Now more than ever, we encourage everyone to shop local and visit Hoboken,” said Mayor Dawn Zimmer. “Everything that makes Hoboken great - our restaurants, unique shops, and parks - are open and ready to enjoy. This holiday season, come out and support Hoboken and the businesses that help make it thrive.”

“This weekend is Small Business Saturday, but shopping local must not begin and end there,” said Gregory Dell'Aquila, President of the Hoboken Chamber of Commerce. “Many of the impacted local businesses re-opened quickly and are determined to recover, but they need your support by keeping it local. Shop, dine, stay and play in Hoboken.”

The City’s cleanup efforts are also continuing. For the second weekend, the City is calling for volunteers to participate in a citywide cleanup on Saturday, November 24 from 10am to 4pm. Residents of Southwest Hoboken are asked to abide by the posted “Temporary No Parking” signs so that crews and volunteers can clean the streets. Residents can RSVP to participate via the Facebook event listing: www.facebook.com/events/450600574998314 or volunteers can go to City Hall any time between 10am and 4pm.

“It’s been a very difficult time for our community, and I thank everyone for their support,” added Mayor Zimmer. “I wish everyone a happy, safe, and enjoyable Thanksgiving.”
Posted by SmartyJones at Wednesday, November 21, 2012
Hoboken is OPEN FOR BUSINESS
2012-11-21T14:10:00-05:00
SmartyJones
Comments

At the Elks Club a few weeks back, Da Horsey was taking pictures of the event with many NJ political dignitaries in attendance who were overshadowed by one person who held the room under his sway.  That person was of course Governor Chris Christie.

As the swarm made its way around the room, Da Horsey suddenly found himself going from photographer to participant.  This photo comes courtesy of our colleague Kurt Gardiner.

Da Horsey thanked the Governor for many things and we'll keep the list to ourselves.  Feel free to caption the discussion if you so desire.  Here's one in a humorous vein to get you started.

Horsey: Governor she's running amok; an absolute cancer to our community even after you gave Hoboken $5 million and saved the hospital from her clutches.

Governor: Horsey keep the faith and know you are never alone in your fight against corruption while I'm Governor.