The official numbers will be released later today but the news is all but official - the Kids First BoE slate has swept the election over the Move Forward challengers. 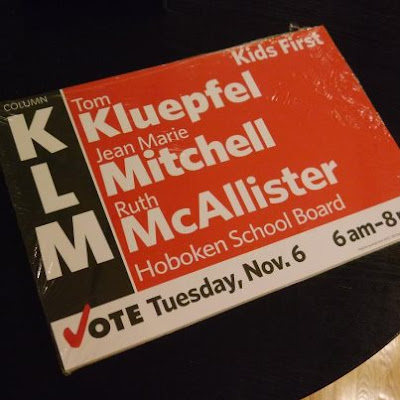 The race for third and fourth place grew from the six vote lead for Jean Marie Mitchell over Liz Markovitch but came in at a difference of less than 100 votes.

The majority for Kids First was not fully in doubt in the battle for the BoE but the sixth seat was in play by most close observers who looked at the outstanding ballots attempting to decipher where the votes came in the provisionals.

In addition, the rent control question failed in a very tight final count - unofficially less than three dozen votes but the final spread is in the area of 50 votes!  The final numbers will be updated here later today.


Here are the certified totals from the Hudson County Clerk's Office:

Jean Marie Mitchell of Kids First increased her lead winning the third seat by 78 votes.
She will join Ruthy McAllister and Thomas Kluepfel being sworn in on the BoE in January. 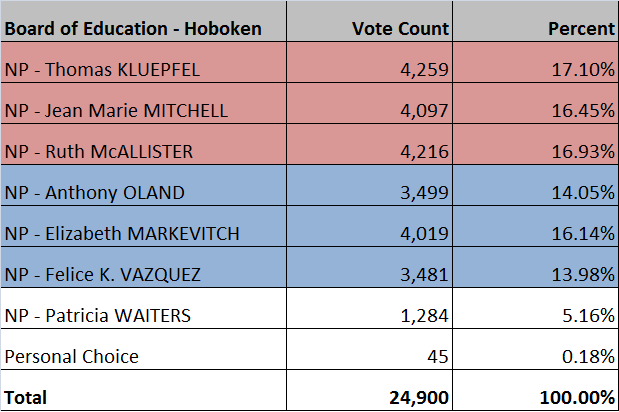 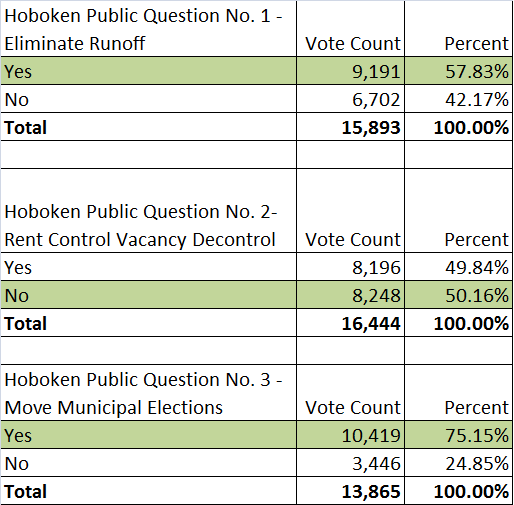 Three weeks ago the Kids First grassroots campaign took to the streets united in spirit to face down an opponent with signs of heavy expenditures against it visible everywhere.  In the battle of Reform vs. the Old Guard, there was no bigger showdown since Dawn Zimmer vs. Peter Cammarano in 2009.  On that day, Hoboken looked like it had been overtaken with backing for Cammarano as his signs and street workers were seen in every corner of town.

If you were there and didn't think Cammarano was a safe reasonable option, it appeared the election wasn't in doubt.  A chance passing on the street with MSV Executive Publisher Jimmy the K said the opposite as he headed to the airpot, "It's going to be close," he stated matter of factly.  So it was.

Today as then, we're into overtime heading to extra ballots and word of some decisive partial count is likely today.  It's not election day in Hoboken, but some folks could be getting elected.