The Hoboken Redwings are the Champions! 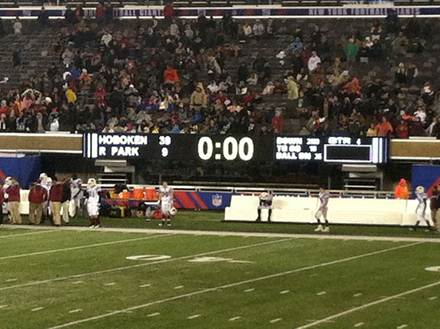 The Hoboken High School Football Team won the 9th State Championship in program history on Friday evening at MetLife Stadium in East Rutherford. After breezing by their first two rounds of playoff opponents by a combined score of 89 to 14, the Redwings defeated Roselle Park High School 39 to 9 to secure the Group I North II Championship. The Redwings, led by Coach Lou Taglieri and his staff, will be honored in a parade on Monday, December 10th. The parade will begin at 11th Street and Washington Street at 3:30pm and will conclude at City Hall at 94 Washington Street.

“Congratulations to the Redwings football team, Coach Lou Taglieri, and his staff, for an amazing season and for bringing the State Championship back to Hoboken,” said Mayor Dawn Zimmer. “We invite the community to join us for a parade on Monday to celebrate their great accomplishment.”
Posted by SmartyJones at Friday, December 07, 2012
The Hoboken Redwings are the Champions!
2012-12-07T21:19:00-05:00
SmartyJones
Comments

Free connections to Grove and Exchange Place for PATH on weekend