The following letter was originally submitted and appeared in the weekend paper:

In light of the massive destruction caused by hurricane Sandy, I am extremely disappointed in Beth Mason that during this time of recovery she would pursue a lawsuit against the City of Hoboken over the appointment of Jim Doyle to the Hoboken City Council.  I do not know Jim Doyle personally but from afar he seems like the type of individual who is concerned with doing what is best for the citizens of Hoboken.  Ms. Mason, on the other hand, seems to have forgotten that she represents the people who live in the 2nd ward of Hoboken.

Many of us who live in the 2nd ward (examples: The Shipyard, Hudson Tea and Maxwell Place) expect our elected officials to do what is best for the community at large and hold them to a high standard of ethical behavior accordingly.  Unfortunately, Ms. Mason has failed miserably in both regards.  To that first point, her refusal to vote in favor of various common sense improvements to the City of Hoboken is irrational at best.  I cannot express in a short letter all of the many instances but a few examples include: 1) Mason’s vote against the simple refinancing of the hospital garage that ended up costing the city approximately 4 million dollars out of last years’ budget; 2) her vote against street improvements to Washington Street, Newark Street, Sinatra Drive and Observer Highway; and 3) her vote against putting up a traffic light at 16th and Willow.  In regard to my second point, her association with individuals that reek of ethical improprieties is very disconcerting to say the least.  To this point, I recently read in the Hoboken Reporter that Ms. Mason currently employs an individual who was accused of harassing an official of the board of education as well as her young daughter?  Why would she continue to employ such an individual?  In addition, it was reported a truck paraded around town in support of the Move Forward campaign displaying inappropriate images?  Why would she continue to support such unacceptable behavior?

There are many questions in this regard that surround Ms. Mason and have been the focus of some local internet blogs.  I understand Ms. Mason must be very disappointed with all of the attention she has drawn from these blogs (e.g. “The Hudson Mile Square View” and “Grafix Avenger”) but she has done nothing to explain her actions or address the issues these blogs have brought to the public’s attention?

In my personal opinion, Ms. Mason has completely lost touch with her constituents in the 2nd ward.  She continues to take positions on important matters affecting Hoboken that, I believe, are counter intuitive to what most 2nd ward residents would want.  Therefore, if Ms. Mason is not willing to do what is in the best interests of her constituents then I would respectfully request that she resign and give someone else a chance to do what is in their best interests.

Original link for comments at the HR: http://hudsonreporter.com/view/full_story/21061737/article-I-am-extremely-disappointed-in-Mason?instance=secondary_stories_left_column#cb_post_comment_21061737

Fund for a Better Waterfront is hosting a fundraiser, "Parks in Peril" on December 11, 2012 at 7PM at the Elks Lodge 1005 Washington Street in Hoboken.  Fund for a Better Waterfront ('FBW") has been a great partner to Hoboken Residents for a Public Waterfront during our fight against Shipyard's Monarch project.  FBW secured legal counsel and lobbied hard to get the Monarch development denied by both the Hoboken and Hudson County Planning Boards and is now active in the pending litigation over those denials. We hope you can attend and contribute to help this fantastic organization reach its lofty goals for the Hudson River waterfront.  You can purchase tickets here: http://betterwaterfront.org/?page_id=1933

If you cannot attend this year's event, please consider making a tax deductible charitable donation to this great organization which has done so much to make Hoboken a great place to live. 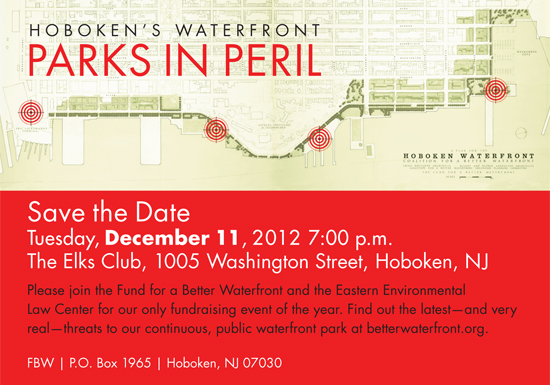