A glimpse of Old Hoboken: A Good Man is Hard to Find

During the years I lived in Hoboken, Democrats ran the place. You may not have heard of its long-tme mayor. This vignette puts the spotlight on him and a couple of his successors.

A GOOD MAN NOWADAYS IS HARD TO FIND

The Democratic Party controlled many big cities during the years I was growing up. Among the more notable mayors were: Boston’s James Curley;Chicago’s Richard Daley; Kansas City’s Tom “Boss” Pendergast; and Jersey City’s Frank Hague. Not to be outdone, Hoboken’s mayor Bernard J. McFeely held office for seventeen years, from 1930 to 1947, during which time he made those other professional politicians look like amateurs. His name should be more reviled.

During his years as mayor, he never earned more than $5,000 per annum. When he died, he left an estate said to be valued at $5 million dollars. He never married, but he was a member of a large family. At one time, the city employed sixty five of his relatives including one brother, the Superintendent of Schools and another, the Chief of Police. Once I saw the Chief enter a candy store, walk behind the counter, ring up the register, scoop out some bills, and saunter out.Cop's Grab was the term used by older schoolboys while swiping some younger kid's marbles. It was easy to see the origin of the game’s name. 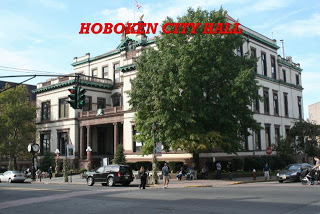 The mayor owned a sanitation company. Hoboken awarded its municipal waste hauling services contract to his firm every year he served in office. Even after WW II, his company continued to use horses to pull its open-top garbage trucks. McFeely did not believe in replacing anything that was still working.

Anyone who ran a political race for election against the mayor had to endure rough treatment. One year, the Hoboken police arrested the Republican candidate on the eve of the election based on some trumped-up charge. He spent the day in jail while awaiting the outcome of the election. He lost. It was difficult to find anyone willing to challenge the mayor or the system.

The New York Post ran a special edition one time, exposing the city’s political corruption. When their delivery trucks arrived in Hoboken by ferry, police commandeered them and accidentally destroyed the papers. McFeely did not like bad press.

Of course, McFeely doled out city jobs to people and provided financial aid to others during the Depression era. These citizens rewarded his regime by continuing to reelect him. McFeely finally tasted defeat in 1947 when the returning veterans demanded a change in city government.

I recall the fervor that swept over me when voters installed a new form of municipal governance that year. Five officials were elected to a city council, and they voted one of their number as mayor. In that first year, three Italians and two Irishmen were elected to serve. John Grogan garnered the most general election votes. When the five council members met, the three Italians voted one of themselves (Fred De Sapio) to serve as mayor, setting the tone for what turned out to be years of controversy. Now, instead of just one person running the city and stealing it blind, we had five people trying to run the place, and steal too.

The first act of business of the newly elected board was to order nameplates for themselves, at a cost of $200 each, on a non-competitive bid from some friend of the new mayor. The number of players had changed, but not the game. It was business as usual at City Hall.

Grogan was persistent and eventually was elected mayor. When my mother died in 1961, he came to her wake, and shook hands with my father.Hoboken’s mayors made it a practice to attend wakes, an easy way to endear themselves with the family of the deceased and secure votes. His appearance pleased my father, not me. I doubt he knew either of my parents.

The year 1948 marked my initial presidential voting opportunity. A registered Republican, my vote went to Truman, the Democrat. I was swayed by the fact that Harry had sent me a nice form letter upon my discharge from the Army Air Force a year earlier, thanking me for my contribution to the nation. I felt duty bound to vote for a candidate who expressed such sentiments. In addition, the looks of Dewey’s mustache turned me off. You have to have a sound basis upon which to cast your ballot.

After moving to San Mateo, California in 1955, my desire to immerse myself in political issues waned. The elected officials there were all honest people. Who could be bothered taking an interest in a lily-white government? Hell, the city even used motor-driven trucks to pick up garbage. It would have pained McFeely to witness such unnecessary expense in the name of progress.
Posted by SmartyJones at Wednesday, December 26, 2012
A glimpse of Old Hoboken: A Good Man is Hard to Find
2012-12-26T13:05:00-05:00
SmartyJones
Comments