Assemblyman Ruben Ramos who is running for mayor in Hoboken gave his support along with several other Latino elected officials for Barbara Buono for Governor as reported by the AP.

Ramos is mentioned in the story:

Ramos and his council slate are competing with the new entrant, the recent backed slate of developer Frank "Pupie" Raia and Councilwoman Beth Mason who inserted Tim Occhipinti for mayor moving himself down into a council at-large seat.

The Ramos campaign put out their platform detailed below: 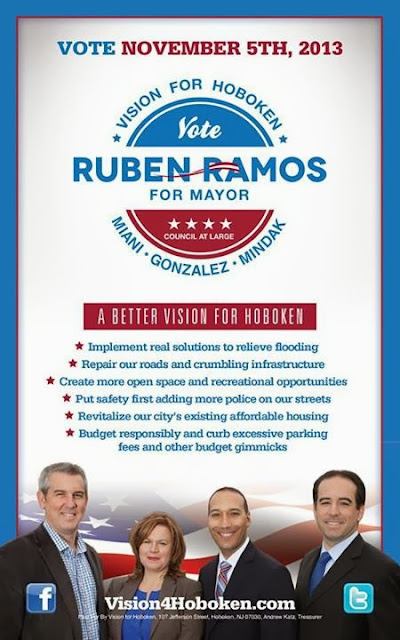 Talking Ed Note: There's word the discussion of affordable housing and the controversial Vision 20/20 massive redevelopment has been removed from all literature and the Ramos campaign website.

MSV is not confirming this for the moment but it appears there is no platform detail on anything regarding Vision 20/20 or affordable housing.

HHA's controversial Director Carmelo Garcia who is suing the City of Hoboken, the mayor's husband and the former chair Jake Stuiver on a host of alleged charges including "ethnic cleansing" for failing to support his undocumented Vision 20/20 program was seen recently outside the Ramos Campaign headquarters.
Posted by SmartyJones at Thursday, September 26, 2013