Snapshot analysis on the mayoral forum

When the chips are down, you need to shake things up and for the two mayoral challengers it meant going all in - double or nothing.  From Mayor Dawn Zimmer's side, it meant standing on her record and letting the mud fly and occasionally land on her shoes.

For Assemblyman Ruben Ramos, it consisted of loading up for a war party and doing a rain dance on everything and anything possible. He came prepared and unloaded whenever he could and did his best to highlight his long career of public service and avoid the obvious land mines in his tutelage under Mayor Dave Roberts. He was partially successful in doing so. On other occasions not so much.

On the Tim Occhipinti side of the fence, there was a grimness before the proceedings began. He's not only fighting for a job he needs but possibly his political life. A third place finish likely puts a bullseye on his back for what Political Insider Augie Torres called an expected challenge for the fourth ward council seat he's holding - from the former seat holder - Assemblyman Ramos.

The upside for Occhipinti, he spoke more fluently than he did in his 2010 debate against Michael Lenz. His support however was lacking from the people closest to him politically (and financially) in Beth Mason nor Frank "Pupie" Raia were in attendance. Neither was campaign manager Jamie Cryan or his fellow running mates Peter Biancamano or Britney Montgomery Cook. Not exactly a ringing endorsement from the people you share home mailers with atop the ticket. (Yes, it's all very odd.)

Much of the evening was focused around the mayor's achievements or centered around her achievements not being adequate - be it on the approximately 12% tax cut she's produced in her term or management of public safety (crime is flat).

Where there was highlights of true disagreement, the moments were more telling. Vision 20/20 again came up as a stand alone question and it showed exactly who has what vision for Hoboken.  Both Ruben Ramos and Tim Occhipinti came out strongly in favor of the controversial undocumented redevelopment while the mayor questioned the very process in how it's been presented to her and the City and what she described as inadequate management of the existing buildings.

On public safety, Assemblyman Ruben Ramos stuck to his platform position to hire more police and Tim Occhipinti said he too favored adding "more boots on the ground." The mayor cited a state study showing crime flat at historic lows aligning with her reorganization of police and fire making it less top heavy and efficient across the ranks saving millions in the process.

Differences on bringing back the St. Patrick's Day parade on a Saturday were featured as in the council forum. Both Ramos and Occhipinti favored the move while the mayor refused saying she preferred a Wednesday to keep the event from becoming problematic to so many residents as it had.

In the end, no one really moved the needle in the race but there were some interesting moments on patronage, development and again vote-by-mail.  Some video to come on that exciting aspect unique to Hoboken voting. 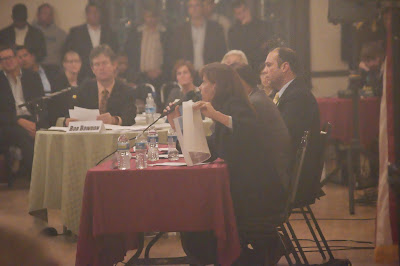 Talking Ed Note: QLC's live feed on occasion went down but they called over Da Horsey to help get it back online.  MSV will get the footage up and you'll be able to hear in gut wrenching detail woes of Hoboken Parking as another camera shot both the council and mayoral forum.  They will be available soon for viewing on Cablevision Channel 78.

Posted by SmartyJones at Thursday, October 24, 2013