From the desk of City Council President Peter Cunningham:

As everyone knows, I am supporting the Zimmer Team and Kids First.  The candidates for Mayor, Council and School Board have all been working real hard.  We know because we have seen them in the streets, knocking on doors, and writing to their neighbors.
I have been out there too, and the vibe is good.

However, there are two issues which can doom this campaign and years of hard work toward the tremendous changes we have made in local government - complacency and voter fraud.  We have had both, and together it's a perfect storm.

We need our voters to turn out.  Elections in Hoboken have for a fact been won (or lost) by ONE VOTE.  We must not take the good vibe for granted.  Please make sure you study the ballot preferably before you get to the polls and vote.  It's a crowded ballot with many candidates and issues to consider.  Be patient at the polls.  There may be new people working the polls, or changes inside your polling location.  With the crowds, it could be confusing, but you must cast your vote. Voter fraud happens in Hoboken, it happened against me in 2007.  It is likely to happen at the polls in an effort to discourage you, but you must cast your vote!  Don't be turned away if you think you are a legitimate voter.  Vote a provisional ballot if they will not let you vote on the machine.  You must cast your vote!

And that takes us to the voter fraud and the abuse of Vote By Mail ballots.  Both competing campaigns have again exploited the elderly, disabled and all others less fortunate (see this story detailing the abuses).  They expect to win this election with massive VBMs delivered - TOMORROW.  We saw it before with Occipinti against Lenz in 2010.  750 VBMs were delivered on election day.  Days later elect reports showed payments made to those voted VBM.  It was more than a coincidence, it was voter fraud.  We need as many votes as possible on the machines as I believe this to be close when machine votes and VBM are tallied.  Your vote is extremely important.
This election means so much for Hoboken and our future, as well to validate all our hard work and accomplishments to date.

Please pass this on to your neighbors, and let me know if you have any questions. 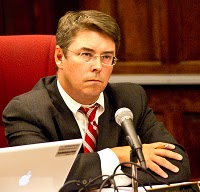 Posted by SmartyJones at Monday, November 04, 2013