As we've reported earlier, the Mason One Hoboken Team has disintegrated into a reflex of self-interest with both the "top" of the ticket and the top underwriter of the ticket out and about mouthing the most important words in the world: "just vote for me."

Frank "Pupie" Raia has taken the advice he's been giving around town to voters for weeks to a new level with this full page ad in the Hudson Reporter.  It's ostensibly "paid for" by a Union City North Hudson Sewerage Authority commissioner Libero Marotta.

Don't out of town commissioners love Pupie just as much as you?  Enough to pay for full page ads in the county Old Guard paper?  Stop laughing that's an order.  They'll be more time to laugh later today when we show you the full page spread from Bet herself as she too of the inverted popularity ratings also took out a full page ad urging people to vote for her Mason One Hoboken Team.

Because it worked out so well last time. 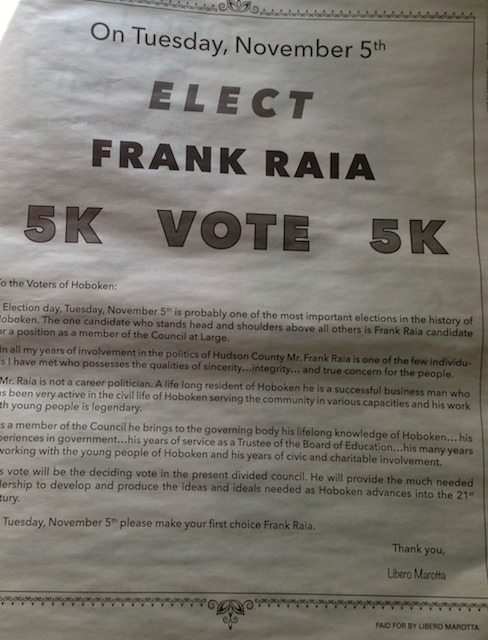 Frank "Pupie" Raia is taking this "just vote for me" suggestion a bit too far.  He has his own full page ad in the weekend paper to go along with other full page ads for the Raia-Mason slate.

As one Old Guard supporter said weeks back about Raia, "If he ever became the fifth vote on the City Council, it'd be a nightmare for the whole city."

True, but there's still an antidote for the nightmare.

Related: Libero Marotta was apparently suspended from practicing law but he is no longer counsel to the Union City Housing Authority as suggested in comments.

Posted by SmartyJones at Monday, November 04, 2013