Hoboken Revolt: 'Only the Zimmer Team holds the line on taxes' 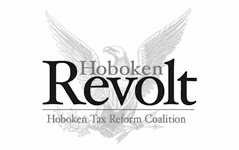 In 2008, Hoboken suffered an 87% municipal property tax increase due to years of mismanagement and corruption.  Hoboken Revolt, a citizens’ coalition, was subsequently created to inform the public on what drove the tax increase and what could be done about it.

Given recent local election results, it cannot be overstated that every vote is important. In addition, local elections affect your pocketbook more directly than any other level of government.  As part of our mission to inform and urge participation, consider a few issues that will be determined by the election this November 5:

Zoning Board Appointments – Six of nine Zoning Board seats are up for re-appointment in January. Mayor Zimmer led the successful effort to give appointment authority back to the City Council, where it had been until former Mayor Russo made the ill-fated change to provide the mayor this power in the 1990s.  Taking sole power for zoning appointments paved the way for bribes, which eventually resulted with Mayors Russo and Cammarano in prison.  Council candidates Jim Doyle, Dave Mello, and Ravi Bhalla support Mayor Zimmer as do council members Jen Giattino and Peter Cunningham on this issue.  Together, they constitute the majority needed to keep appointment authority out of the hands of one person.

Vision 20/20 Must Be Properly Vetted - To date, sufficient details have not been presented to either the public or the city government to enable proper review of the Vision 20/20 project.  It therefore lacks any transparency, which is particularly alarming given that even according to Vision 20/20’s proponents, it will double the size of the Hoboken Housing Authority (HHA).  While council candidates Doyle, Mello and Bhalla have pledged that they will not support this project until it has been fully disclosed and vetted, their opposition dangerously have stated they will vote for approval without further review.

Church Towers and Marine View Plaza PILOTs Will Expire.
Although Church Towers paid off its affordable government-housing loan, it still has an agreement (PILOT) that limits its tax contribution to approximately one third of what the building would otherwise contribute to city coffers.  As the building’s estimated tax assessment is roughly equal to 2% of the tax levy this is a significant concern for taxpayers.

The PILOT for Marine View Plaza will also expire during the next mayoral term.  Hoboken needs a mayor and a council who will consider these issues openly and carefully, and ultimately act in the best interests of all Hoboken citizens.

Police and Fire Department Contracts Will Be Renegotiated.  Among Mayor Zimmer’s progress was making the HHA police a separate department.  Where previously Hoboken’s police earned overtime pay for HHA duty, the HHA police now work at regular pay.  This is but one example of a smart allocation of city resources.  We must ensure that such cost-saving measures—with no loss of safety for our city—along with other recent concessions (including health care premium contributions) remain following the next round of negotiations.


The Taxpayer Coalition
Posted by SmartyJones at Friday, November 01, 2013