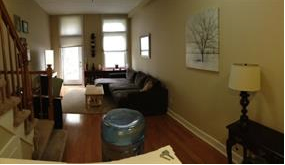 This lower Monroe St. fourth ward condo, occupied by the occupant of the fourth ward council seat can be yours as it's officially on sale.  Price should be negotiable as MSV hears the person who put up the money for the unit wants her money back.

She certainly deserves it.

Last September, Timmy Occhipinti announced he quit his job with just over a month to Election Day to focus on the Hoboken race for mayor.  After his dismal 17% showing even with easily the most expensive campaign of the three candidates, Timmy is looking to make another move.

Talking Ed Note: It's 10:00 am, do you know where Timmy is?  Occhipinti who has saddled up with developers repeatedly always eager to sell out Hoboken at least this time is seeing a property in his name (at least partly) being sold.

Reminder: in a condo sale, all occupants must remove themselves.  You could agree to a price and ask for one of those collectible souvenir buttons comparing the Irish to a meat patty.

The whispers are threat of legal action forced the condo to to go on the block.

Posted by SmartyJones at Saturday, November 16, 2013