MSV's original short "Downfall of a Wannabe Shark," was reposted on the home page about a month ago.  It was featured on the main page for the first time and the runaway hit already seen thousands of times on YouTube, MSV and the hosting site never gets old.

The short seems more true today than when it was released in the summer of 2010.

Some folks even those less than supportive of Hoboken's reform movement found it so hilarious they thought it should be turned into a series.  Unfortunately the tools in its creation changed.  The voice for Bet is no longer available and she's gone on to do other things as the voice Siri for Apple.

But we'll always have Bet here and her stink breath fishy operative.  On its way to 10,000 views in this run alone, here is the timeless classic with our power hungry star Bet desperately using the family checkbook to destroy all those in the way of her dream to lord it over others.

Brian do you think that family checkbook comes with no price?  Think again. 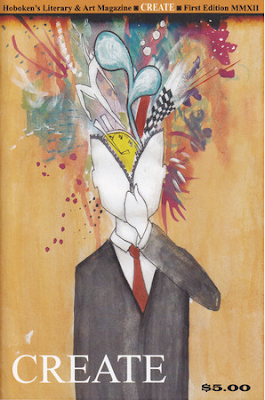 As featured on Hoboken Patch:

Under the tutelage of advisor Sharon Malenda, Hoboken’s Student Literary Magazine “CREATE” received a national rank of “EXCELLENT” from the NCTE (National Council of Teachers of English).  417 schools nationwide entered this prestigious competition and out of those 417 schools only 227 were good enough to be ranked. Hoboken’s magazine faired very well nationwide, with only 159 schools earning a higher ranking of “SUPERIOR” and did even better in New Jersey, where only 22 schools ranked higher.  Falling slightly below mainly large regional New Jersey high schools and private schools, Hoboken’s magazine “CREATE” showcased the immense talent that our small school holds. As this is the first year that “CREATE” was published our high ranking was an enormous achievement.  We look forward to honing our students’ creative writing skills in the years to come to produce an even better magazine and take home the coveted highest award prize. The featured writing in “CREATE” was produced by the students of Ms. Malenda’s The Literary Magazine Club and her creative writing class and the art was collected from Mrs. Ising’s IB students and Ms. Kubach’s art students and art club members. If you would like to purchase a copy of this awarding winning magazine, please contact Ms. Malenda at Sharon.malenda@hoboken.k12.nj.us. The cost is $5.00 and the money will be used to ensure that we can produce another magazine this year. Supply is limited! Support the arts!
Posted by SmartyJones at Sunday, January 27, 2013
Hoboken High Literary Magazine "Create" achieves national and state ranking
2013-01-27T10:47:00-05:00
SmartyJones
Comments