Release Party for "On the Waterfront" at the Historical Museum


On the Waterfront: Criterion's New DVD Boxed Set Release Party at the Museum


Fans of the movie On the Waterfront, which was filmed almost entirely on location in Hoboken 60 years ago, won't want to miss a special event at the Museum: All are invited to a launch party for a new DVD/Blu-Ray boxed set with special features. The Criterion Collection is releasing a newly restored version of the movie, packaged with new extras, such as interviews with Hollywood legends, film critics and scholars, and people involved in the filming, including local boy Tom Hanley. The event is free, and copies of the boxed set will be available for sale.

Tom Hanley, who grew up to become a longshoreman, and Dr. James Fisher, Fordham professor and author of the book On the Irish Waterfront, will join us at this special DVD launch party. Hanley portrayed the young kid, Tommy, who idolizes Marlon Brando's boxer-turned-longshoreman Terry Malloy, at least until Malloy testifies against the longshoreman's union for the waterfront corruption commission. Early in the film, Malloy teaches the boy how to tend homing pigeons, but when he learns of his hero’s betrayal of the long-standing code against squealing, his line, “a pigeon for a pigeon,” stings Malloy. Hanley himself grew up to become a longshoreman in real life, rising in the union ranks to the position of shop steward.

The movie, directed by Elia Kazan and written by Budd Schulberg, swept eight Oscars in 1954, including best picture, director, actor, supporting actress, cinematography and screenplay. The story was inspired by journalistic accounts of the waterfront commission investigating corruption in the unions that controlled the entire New York port system. 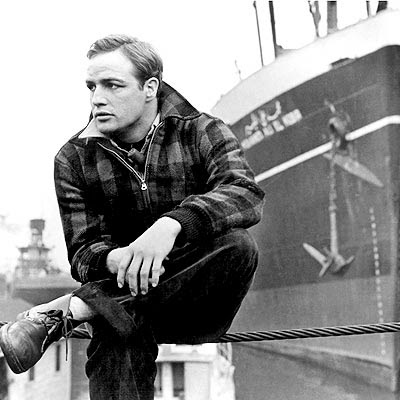