Stand up and be counted...

After Hurricane Sandy, there's been upheaval and suffering in our community.  Many have seen huge setbacks due to the storm with losses, insurance issues or work.  Some have suffered worse.

On the legal front, the City of Hoboken says it's bearing the continued cost of the Jim Doyle lawsuit running into the tens of thousands. With the aid of fine counsel, they won a big victory in Hudson County Superior Court.  The case has been appealed again so the legal appointment of Jim Doyle remains on hold.

But the City is not the only one facing onerous legal bills against... you know.

For months, people have offered encouragement, spoken about taking a stand and said they hope to see the endless attacks and intimidation against speech halted.  To those that have given, thank you very much for your kind support.  You've shown tremendous fight and even bigger hearts.  You know who you are.


Now we're in the homestretch so it's time to stand up and be counted... confidentially of course.


Thanks kindly again for all your support but especially for standing up and being counted in this effort.

Beth Mason - 'Stop fighting back or I'll sue you all again'

Beth Mason's gone on a barrage of propaganda releases in recent days.  Statements on scheduled City public meetings on parks, Sandy efforts by the Federal and State government, and a robocall to residents last night.  Obviously overcompensating due to the news her year long effort to buy an Assembly seat crashed and burned, she wants you to pay attention to anything but that bad news.

For almost the same length of time, local media save for Hoboken411 on occasion doesn't even pay her fabricated releases any mind.  Rather than humiliate her and try to scratch at the surface of the obvious fabrications, they just pretend it never arrived in their email inbox.

The biggest push Beth Mason's political operatives have made in recent days is fashioning a letter so full of malarkey, it's more an effort to help Beth feel better after State Senator Brian Stack's brushoff than a realistic effort to convince Hoboken residents it's Mayor Zimmer's fault she has to sue her, the reform council members, the City Clerk and the people of Hoboken.

It's not clear if she's been holed up in the bedroom for days like she was reported to have done after the 2009 spring mayoral election.  That election saw her as the favorite flame out so completely, she didn't even make the runoff.  After four days, It took people carrying her out of the bedroom to immerse her back into some semblance of reality.  (Others don't believe it's been entirely successful.)

In recent months, Beth Mason's legal guns for hire had their arguments handed to them by Judge Bariso.  Repeatedly.  He ordered her and Michael Russo with the rest of MORTe to show up and vote on the Jim Doyle appointment.  He then scolded their childish prank on hiding out and then filing a lawsuit, deriding their "gamesmanship" as so much MORTe nonsense.

Beth Mason took that real well too.  Her legal team filed another appeal to stop the Jim Doyle appointment after that defeat.

Maybe what the lawyers need to be doing is drafting terms of her being committed to a mental institution. 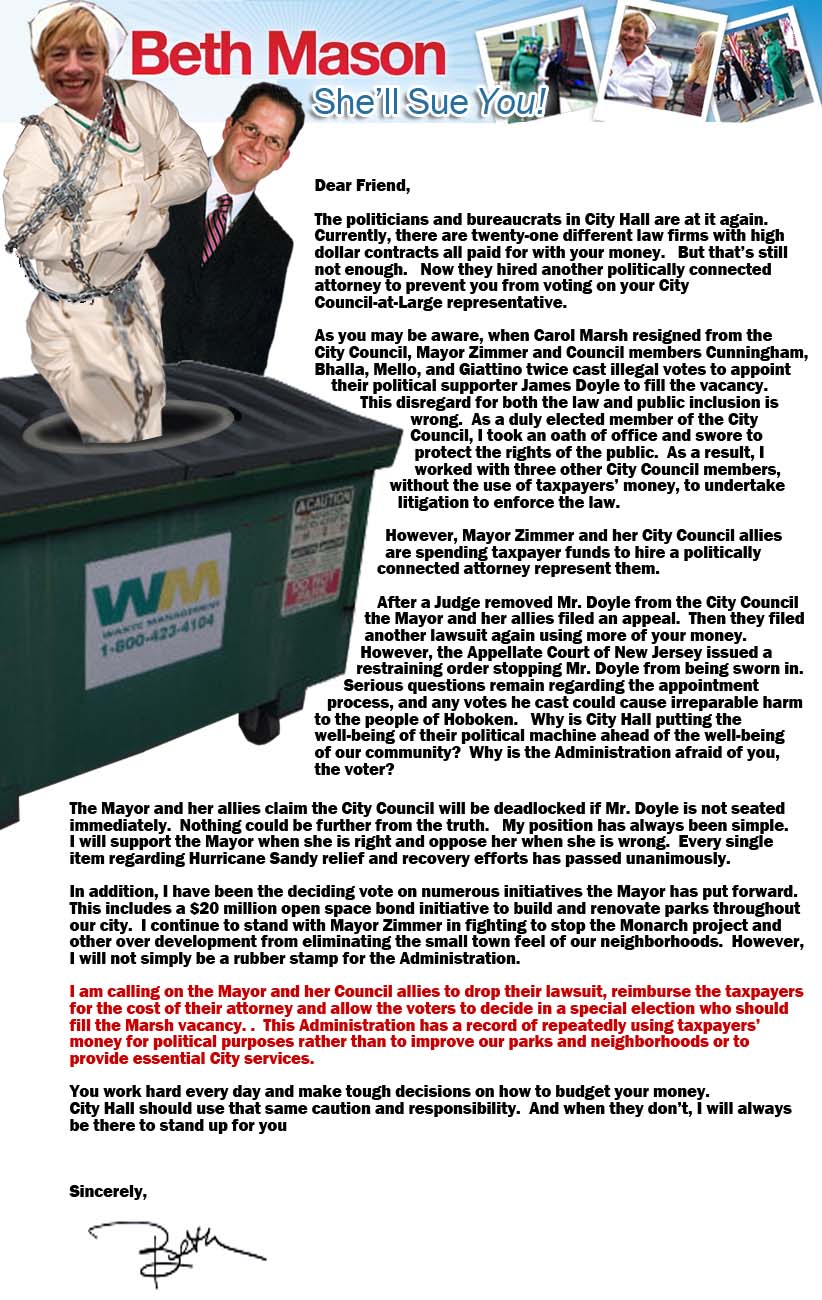 All text original by Beth Mason political operatives who write all her "stuff."
Beth Mason in strait jacket graphic courtesy of Grafix Avenger.
Posted by SmartyJones at Wednesday, February 27, 2013
Beth Mason - 'Stop fighting back or I'll sue you all again'
2013-02-27T08:18:00-05:00
SmartyJones
Comments