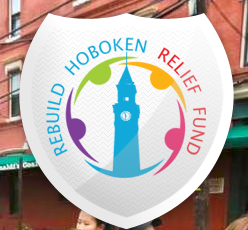 Rebuild Hoboken Relief Fund Set to Mail Aid Checks
Will Distribute Almost One Million Dollars
At a press conference yesterday, the Rebuild Hoboken Relief Fund announced that funds are ready to be released to local residents and businesses.  A total of $974,309.46 will be distributed.  According to Bernard Kenny, chairman of the fund, 493 checks will be mailed next week, each in the amount of $1976.46.  The grant award was determined by the total funds available divided by the number of qualified applicants.
The mission of Rebuild Hoboken Relief Fund was to help fill the gap between FEMA assistance and insurance reimbursement.  The 501(3)(c) charitable organization sprang up immediately after Hurricane Sandy, and within days its website, http://rebuildhoboken.org/, became a central source of information for those seeking assistance and for those desiring to make contributions to the Fund.
Applications for aid were received until February 9th.  The board enlisted the Hoboken Clergy Coalition to independently review the applications to determine whether all criteria for aid had been met.
An early and generous gift of $250,000 from Haven Savings Bank, headquartered in Hoboken, was included with major donations from The Robin Hood Foundation, Marsh & McLennan and Major League Baseball.  A black-tie gala was held at the W Hotel in Hoboken in early February and was supported by local businesses and by hometown celebrities including Buddy “The Cake Boss” Valastro, in addition to the Sinatra Family, helping the gala gross over $500,000.  The Rebuild Hoboken Relief Fund also drew individual checks and online contributions from residents as well as people across the country.  The proceeds from numerous activities staged by small business and local nonprofits, such as cut-a-thons held at hair salons, a concert by Broadway musical stars and fundraisers by local bars, swelled the fund to nearly $1 million in less than four months.
According to Kenny, the Rebuild Hoboken Relief Fund now will shift its focus to provide financial assistance in future disasters, such as displacements of victims from major fires or floods.  To that end, $15,000 will be held as a reserve fund, a small portion of which also will cover insurance and necessary auditing and tax filing fee.  “The fund will have some money on hand to provide instant aid, but even more important is that the infrastructure is now in place to respond immediately to raise money for victims of future catastrophes,” says Kenny.
The seven-person board of Rebuild Hoboken Relief Fund represents all facets of the Hoboken community:  residents, business owners, government officials and clergy.  Other members of the board are Toni Tomarazzo, formerly of the Municipal Hospital Authority; Mayor Dawn Zimmer; local businessman Scott Delea; Larry Henriques; Monsignor Robert Meyer, pastor, Saints Peter & Paul Church; and Joseph Mindak, publisher of hMag.
Posted by SmartyJones at Thursday, March 21, 2013
Rebuild Hoboken Relief Fund to begin payments to 493 recipients
2013-03-21T23:57:00-04:00
SmartyJones
Comments

A recent sign pointing to Councilwoman Terry Castellano's blocking funding to repair and reopen Pier C Park has led to another, this one starring a second member of the rat pack Hoboken Sopranos.

Congratulations Timmy Occhipinti, here's your moment of truth atop the Hoboken Sopranos page: