Well it's a simple answer - after more than three and half years of putting the horse to plough, it's time to truly help pull the cart.  Yes, that means you.  No, that's not a joke, I'm talking to you.

There isn't going to be any PBS pitches, no long winded pleas for support, the market is the market.
Da Horsey has heard about the MSV addiction but being addicted isn't enough.  Plough all kinds of dough into cable or newspapers or magazines, etc... what do I look like a taco?

Is MSV worth about one daily newspaper a week?  Let the market decide!

Shoot, Da Horsey has been cursed (just today by a guy in a silver Honda), sued, repeatedly assaulted and y'all think that's for your amusement?  I'm funny? Do I amuse you, like a clown?

Pony up and then we'll talk.  Until then, go read the drivel on Hoboken411 or the Old Guard rag pumping out the latest Beth Mason propaganda because trust me, they are amped up since January for the November election to turn this town into a Solomon Dwek wannabe developer's wet dream.  And you think driving in and out of town is bad now?


Talking Ed Note: Thanks very much to all those who have signed up and those who are back with Horsey in the saddle again!

Join MSV and get thy chaos

The latest subscriber content: "Chaos thy name is the Hoboken Sopranos," is out.  If for any reason it did't reach your inbox, contact smartyjones@me.com.

If you want to know the chaos in store by the Hoboken Sopranos, join up:
http://www.hobokenhorse.com/2013/04/msv-announces-2013-subscription-drive.html

It's hard work screwing over Hoboken and pointing the finger, a Hoboken Sopranos staple.
Find out why they think an election year gets them even more excited to stick it to the taxpayers. 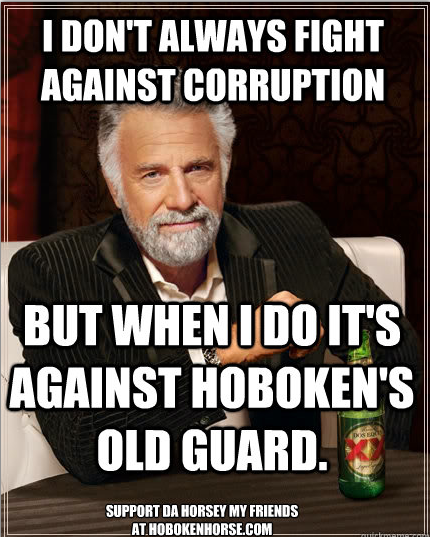