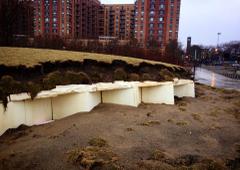 Team Ruben Ramos out for a shoot

On Saturday, the mayoral campaign made a public appearance but it wasn't a planned one.  Team Ruben Ramos met in Pier A park for a photo shoot.  In January, Assemblyman Ruben Ramos announced his run for mayor and the names of his slate.  Until now, most people had never seen any of them.


Talking Ed Note: January wasn't the planned rollout for Team Ramos. The word is April is the time so perhaps this photo shoot was part of the launch for later this month.