In a decision with wide ranging impact on the 33rd Assembly District race, Judge Peter Bariso has ruled Carmelo Garcia ineligible to run on the HCDO - Brian Stack ticket.

In addition, the HCDO application to have additional time to choose a new candidate outside of those who submitted petitions was denied.  A blank space is now ensured to appear on their slate.

The decision largely grew out of state administrative code raising the bar on the federal Hatch Act amended in 2012 while the state law has not seen any respective changes.  Much of the legal arguments centered on the turning point of the code's standing lacking any legislative codification, a legal position Judge Bariso rejected.

The candidates who filed petitions, a total of five are the only candidates eligible to run in the Democratic June 4th primary.  With one candidate already on the HCDO ballot, the other choices are Peter Basso, Jonathan Hilt, Anthony Mills and Hoboken Councilman Ravi Bhalla.  Hilt and Mills are running bracketed together on a 2nd Amendment platform.

Judge Bariso has stayed his decision until Monday at noon to allow all parties to file an emergent appeal with the NJ Appellate Court.

Bariso centered his decision on Garcia's eligibility and the HCDO's request writing, "Both Garcia and the HCDO had full knowledge that Garcia's position as the Executive Director of the Hoboken Housing Authority could present an issue as to his eligibility as a candidate for public office in a partisan election.  Yet, both he and the HCDO choose to proceed as they did.  Having done so knowing and at their own peril, they cannot be heard to complain now."

The attorney for the plaintiffs, Flavio Komuves issued a statement stating:


In a written decision issued just after 5pm this afternoon, Hudson County Assignment Judge Peter Bariso has ruled that 33rd Legislative District candidate Carmelo Garcia is ineligible to run for that office due his simultaneous service on the federally-funded Hoboken Housing Authority.
The judge also ruled that Garcia’s name cannot be replaced on the ballot, which will leave voters with a choice of five candidates, instead of six, for the Democratic Party nomination for General Assembly.

The plaintiffs are grateful (for) Judge Bariso’s thorough decision.

Carmleo Garcia in a phone interview said he'd prefer to hold off on comment until a determination is made on an appeal.  Indications from other sources however anticipate an appeal by the Monday deadline for both his case and the HCDO.

Councilman Ravi Bhalla one of the eligible candidates for the June 4th primary issued a comment via email saying, "Judge Bariso made a sound decision which should be respected.  I will continue to work hard to earn support from the voters and respect from the political leadership in the 33rd Legislative District.

The main threat to a Bhalla Assembly candidacy appears to be a write-in campaign if State Senator Brian Stack chooses to mount that battle.

Talking Ed Note:  This case has wider ramifications and MSV anticipates both rulings by Judge Bariso will be appealed on Monday.  As it stands currently, the case is huge victory for the Hoboken residents who filed the case and also for Ravi Bhalla who could not have anticipated the enormous opportunity presented in the outcome.

Former Hoboken Mayor Steve Capiello has died according to media sources.  He served as mayor of Hoboken from 1973 - 1985.

Speaking of then Governor candidate Chris Christie and Giuliani, he reportedly said,

"They're two of a kind -- you know how Giuliani cleaned up New York City? Well, I'm going to do the same thing in Hoboken." 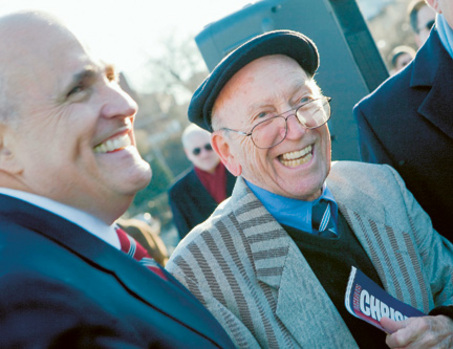