The Bhalla for Assembly campaign announces: 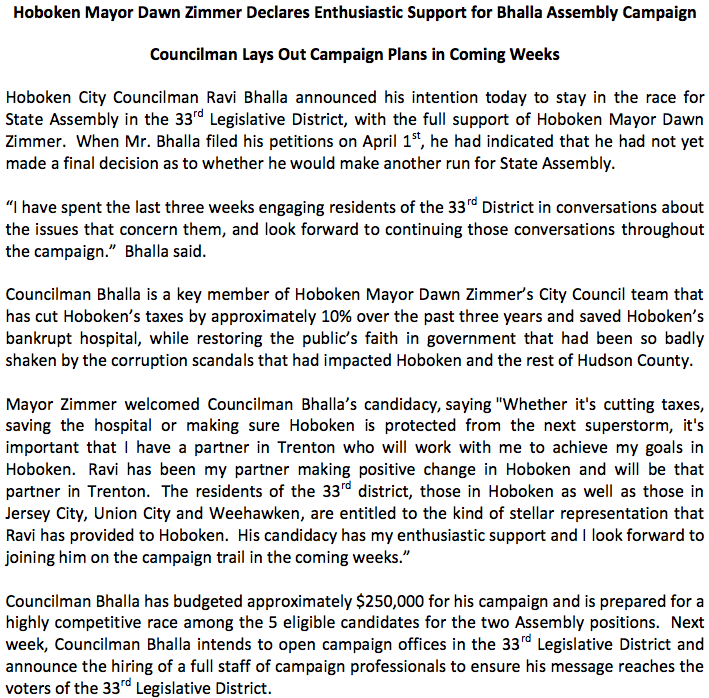 At the City Council meeting last week, Tim Occhipinti opened a pandora box he intended to unleash on his unknowing victim, the Chair of the Budget & Finance subcommittee, Councilwoman Jen Giattino.

Things did not go according to plan.

In the video below Occhipinti questions who's been emailed the public information in budget amendments, namely his.  He turns to Councilwoman Jen Giattino and tells her only two people were emailed the amendments, Business Administrator Quentin Wiest and her.

It's the gotcha moment Occhipinti pines for at almost every meeting.  It invariably ends in a thud with his droning on and on followed often with "the education of Timmy" sadly overlooked until the next meeting where the pain to the public's ears begins all over again.

But here, Occhipinti believes the councilwoman has emailed out the "top secret" budget amendments to someone else.  A blogger!  He's sprung the trap and he has evidence.

Councilwoman Giattino calmly explains no email on any amendment was sent.  She explains to Occhipinti an inquiry by way of a phone call was made and she mentioned that finally budget amendments were submitted adding she's discussed them with a member of the public.  For good measure she adds she'd do the same if another intrepid inquiry came.

As a surprised Occhipinti whines, "Why would you do that?" Beth Mason interjects herself into the discussion.  At first you can hear her insist the email "had to" be sent out, Mason then goes on a rant about "a blogger" in an imaginary conversation she's only had with herself before flipping out hissing twice waving her arm accusatorially, "You pay him!  You pay him!"

While Mason's hissy fit is going on, Occhipinti mutters about lessons and his "teachable moment"  condescending to Giattino who has seen enough of Occhipinti's infamous petulance.  In her most animated comments as a councilwoman to date, Giattino tells Occhipinti not to speak to her like that  saying, "I am not your child."

The reason for the insanity?  The budget amendments were discussed in a phone inquiry with a Citizen Journalist, Hoboken's anti-corruption steed - Da Horsey.

It sent Occhipinti and Mason into a tizzy.  The same people mind you who went on a witch hunt over months in 2011 pursuing tens of thousands of emails coming and going from the mayor's office.

Those very same emails under an FBI investigation which saw the first guilty plea and sentencing scheduled for July as they were illegally being obtained in a conspiracy lacking co-conspirators.

One guilty verdict does not a conspiracy make.

Maybe the US Attorney's Office in Newark is closer to showing a crew of conspirators the price for a real conspiracy against the public.


A little primer for Timmy Occhipinti and Beth Mason on the rights of the public: