at the Hoboken Boys and Girls Club late Friday afternoon.

At last week's City Council meeting, odd comments from Councilwoman Terry Castellano said everyone should be able to have their voice heard no matter how long they live in Hoboken.  It's a remarkable statement deflating the divide and conquer class warfare often propagated by some in the Old Guard to keep control over Old Hoboken voters.

Days later a controversy has broken out over an ice cream truck at Church Square Park.  The voices are however not what we're being told.  Here's the most recent comments from supporters of Terry Castellano and Tim Occhipinti's petition claiming a threat to an ice cream truck: Anyone recognize these similar sounding voices?
Has a familiar Old Guard dog whistle doesn't it?


According to Grafix Avenger, it's Castellano and Occhipinti's new brand of divide and conquer phony ice cream truck politics. 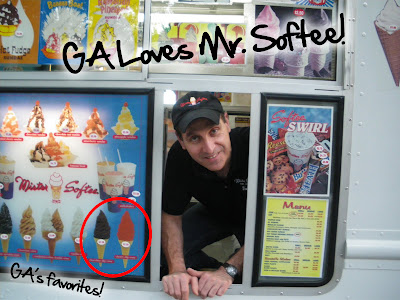 Mayor speaks out on obstruction to firefighters terminal pay

“Tonight’s Council meeting was the second opportunity for the City Council to vote on two different alternatives for paying our firefighters the terminal leave they have earned and we have an obligation to pay. Terminal leave is not salary, nor is it pension cost, as it has been incorrectly described. It is a retirement benefit based upon number of years of service. It is not a current operating cost attributable to the year in which it is paid and therefore the State permits for this cost to be spread out over five years for budget purposes. Taking advantage of this option requires the City to finance the cost with the use of short term five year notes so that the firefighters can be paid immediately upon retirement.
Spreading the cost out in this way protects taxpayers from the unfair burden that would otherwise result when, as this year, an exceptionally large number of retirements occur in one year.
The City Council was fully aware when they voted to introduce the budget that terminal leave would be financed using the legally available five year option.
Council Members Castellano, Mason, Occhipinti, and Russo have indicated that they believe that the decision not to burden taxpayers unnecessarily this year causes the budget to be "underfunded." While this is not correct, the budget is now in the hands of the City Council, and it is within their power to include the amounts in full in this year's budget. Doing so will require an otherwise unnecessary increase in the tax levy.
Since the four Council Members have made clear that they would prefer to raise taxes than to take advantage of the more responsible and fairer alternative available under State law, we will once again for the third time be presenting an emergency appropriation that fully funds the terminal leave costs in this year's budget.
The terminal leave ordinance passed at the last meeting makes no fiscal sense without the corresponding notes that the Council failed to pass. As a result, I will be vetoing the terminal leave ordinance tomorrow morning.
Once again, the budget is in the Council’s hands, and it is their responsibility to fully fund it. I assume, given the public statements of Council Members Castellano, Mason, Occhipinti, and Russo, that they will pass the emergency appropriation so that our firefighters can be paid immediately. It is unfortunate that their choice will also result in an entirely unnecessary burden on Hoboken’s taxpayers."

Comments section has been opened for this story.  Apologies for the oversight.
Posted by SmartyJones at Friday, April 26, 2013
Mayor speaks out on obstruction to firefighters terminal pay
2013-04-26T00:01:00-04:00
SmartyJones
Comments