Mason implosion incomplete without final Russo push in the back 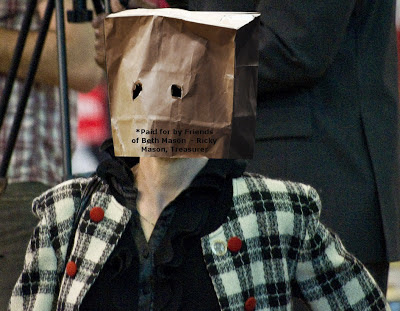 Beth Mason's 24 hour Senate campaign has made her the butt of jokes but she's not out of trouble if the simmering embers of recall are carried out by the Old Guard with the new HudCo powers entering the fray.  While there's been no evidence to date a real on the ground effort is underway, it won't be a secret for long if they throw down.

Nothing happens however until there's a decision in the Jim Doyle case.  Can't act against the lead weight in Mason unless the fool's money bags have been completely emptied.  With a 2-1 decision either way the most likely outcome in the NJ Appellate Court, an appeal to the NJ Supreme Court will follow and more legal fees all around. Since the Mason family underwrites suing the people of Hoboken, Beth Mason is safe from any backstabbing bloodletting from the Russo clan.  (Michael Russo supported Steve Fulop and will stick with a rising star not a loser drowning in the spiraling toilet water in Beth Mason.)

Councilwoman Terry Castellano along with the other MORTe members have no problem ringing up legal bills suing the people of Hoboken well into the tens of thousands and counting. After all, it's power their after and they've neutralized an at-large vote they never won at the polls in 2009.

In the weekend rag, Al Sullivan clearly being rung up by Fulop forces said displeasure with Beth Mason is fierce and payback sought.  But none of this matters unless there's boots on the ground and three second ward residents are required to register a recall committee.  There's other less labor intensive options if pursued.

The rest of this issue is MSV subscriber content. Choose among the selections below and support MSV's efforts to root out corruption.