HHA activist: 'I went to file on being burglarized and got interrogated by Hoboken police on Vision 20/20 flyers'

HHA resident Jessica Coco lashed out at Hoboken Police for inappropriate behavior with what she alleges is an unwarranted fixation on Vision 20/20 flyers and who in the Hoboken Housing Authority opposes Carmelo Garcia and his controversial plan.

In yet a new twist in the Vision 20/20 controversy, HHA resident Jessica Coco alleges the Hoboken Police Department failed to take her police complaint on a burglary she feels is connected to the threats and intimidation with her refusal to back Vision 20/20. 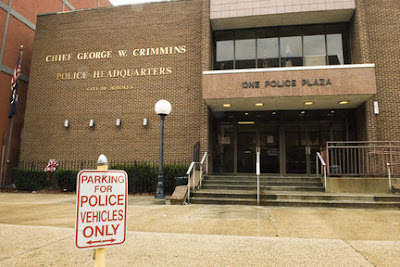 In a story on Grafix Avenger today in an email Jessica Coco writes of her follow up in a letter to Police Chief Falco.  In part it reads:

...Of interest is the fact, the questions asked by the officers were identical to questions asked to tenants by Mr. Garcia and the HHA. Officer Depalma repeatedly insisted I wrote and put up some flyer that I did not write. His partner …on the other hand kept insisting it’s my constitutional right to put up any flyers I want and just admit I put up this specific flyer.
As I explained to Mr. Depalma, I cannot be held responsible for flyers put up by others, especially not those by Carmello Garcia and the HHA. I informed Mr. Depalma that many flyers went out that day, including flyers put up by HHA, which I did not see, but only heard about that said our tenant group was hosting a meeting at the same time as the Hoboken Fair Housing. I’ve also heard as I explained to him, but never saw flyers with our logo denouncing the HFHA. Mr. Depalma rather than ask about these other contradictory flyers or address the threats to my person or property, instead demanded to know the name of the person who was the creator and site administrator of our Facebook page and the names of the people in our organization, which I refused. He even went so far as to say he was going to investigate this information, if I didn’t give it to him. As I explained I cannot divulge any information on dissenting tenants, who do not wish to come forward, especially due to legitimate fears of vehicle damage, apts burglarization, and their children being harmed. I felt especially threatened when Mr. Depalma insistence this was all for “our health”, which sounded like a threat. After all, how is a flyer a threat to my health, but HHA members damaging my car and making threats to my person are not considered dangerous to my health?
Once again no complaint was ever filed about the burglary or about threats to my person. From the conduct of the officers, it is obvious their main concern is not the helpless tenants, but working in collaboration with Mr. Garcia and the developers of Vision2020 to discover and prevent dissent against this plan by identifying dissenters.

Read the whole letter and story on Grafix Avenger:

Get it on tape, we'd all like to hear it - the unedited version please.

An unrelated case in 2010 discusses a claim involving a Guttenberg man and the Hoboken Police Department with a $125,00 false arrest settlement.  It's not confirmed if the Detective Michael DePalma is one and the same in the HHA tenant complaint.

On April 12, 2009, the City of Hoboken (Hudson County) agreed to pay $125,000 to a Guttenberg man who sued members of the Hoboken Police Department for an alleged false arrest and violation of his constitutional rights.

In his suit, Gregg Martin claimed that that Hoboken Police Officers Detective William Vera, Detective Michael DePalma and Detective Sergeant John Rodriguez falsely arrested him at his Guttenberg home on September 18, 2006. According to a December 4, 2008 trial court opinion, the Hoboken officers were investigating a scam being perpetrated by a moving company. When provided with a photograph of the suspect, the Hoboken officers were told by a Guttenberg officer that the photo was of a Guttenberg resident. When the Hoboken Officers went to Martin's apartment and spoke with him, Martin, after a while, reportedly decided to end the conversation and began closing his door. Detective Vera allegedly put his foot in the door, preventing it from closing. The officers then arrested and handcuffed Martin.

The officers reportedly asserted that Martin had obstructed the law by trying to close the door and for refusing to speak with them. Hudson County Superior Court Judge Mary K. Costello, however, held that what started as a non-intrusive "field inquiry" changed into a violation of Martin's constitutional rights when the officer put his foot in the door. Costello wrote that Martin's "refusal to speak with the officers and his attempt to close the door did not convert any suspicion that they may have had into probable cause. As such, their actions were impermissible."

Costello granted Martin a summary judgment on the issue of the officers' liability and the City appeal led. Before the appeal was decided, however, Martin and the City of Hoboken settled the case for $125,000.