It's not over!  The national explosion on one Hoboken mayoral candidate underwritten by Frank "Pupie" Raia and the Mason family is seeing traction - but it's not of the positive variety.

The Timmy Occhipinti campaign is watching its death knell as the blow back explodes in their face!


The story has hit the UPI national wire, continues to explode on sports websites including the Bleacher Report and made the Washington Times via news writer Jessica Chasmar (who also happens to be a MSV twitter follower).

Here's just one typical comment from a commenter at the CBS Sports article who also happens to be a Hoboken resident:

wow, Tim Occhipinti, you're a dick. Politicians who really care (yes, that's an oxymoron) stick to the issues, and don't write letters to a sports figure's older brother, and mock his unfortunate season because he endorsed the other candidate. If you thought you didn't have his vote before, be assured you don't now. And probably lost more votes than you gained with this BRILLIANT move. Your campaign manager must love your strategy. LOL

-A Hoboken Citizen NOT voting for your stupid ass.

Deadspin picks up Manning story: "Shame on you" Timmy!

The hits just keep coming. While the NY Giants are off to the roughest start in years, the cheap political shot against NY Giants Quarterback Eli Manning by the Timmy Occhipinti campaign (known better by its underwriters Frank Raia and Beth Mason) is once again in the national headlines.

Coming off the coverage in the Huffington Post, the Jersey Journal yesterday highlighted the political gaffe but the smack down to Timmy Occhipinti isn't over.  Here's the Deadspin headline:


"You know what, Tim Occhipinti? Eli Manning doesn't need this crap from you."

Well, the two time Super Bowl MVP and NFL champion certainly doesn't need to hear much of anything from the unemployed occupant of the fourth ward council seat who is most famous for his 575 "campaign workers" generating a mere 1240 votes in the 2010 special election.  That and being propped up by the tens of thousands of dollars as a second vote on the council for the Mason family.

Do we even need to bring up one of those "campaign workers" on the Occhipinti campaign not once but twice selling meth?!  (See story above: Timmy's meth lab campaign worker .)

The Timmy campaign's atrocious letter attacking a national athlete who has seen great success while patting themselves on the back as self-declared "dedicated servants" to Hoboken is putting the national spotlight on our mile square. Again.

Was that a parody of good government with the joke on our City?

The Deadspin story ends with a short and sweet message to Timmy:


SHAME ON YOU SIR.

"... out of ideas about how to actually win the election, (Occhipinti) decided to write an open letter...
Not to Eli, but to his brother, Peyton Manning."


Update: 5:40 And now enter the Washington Times. A commenter there wrote of the Raia-Mason One Hoboken (dummies) slate:


No one has seen the mayoral debate at the Hudson Reporter but the Ruben Ramos campaign is going ahead to announce and congratulate itself on the victory: 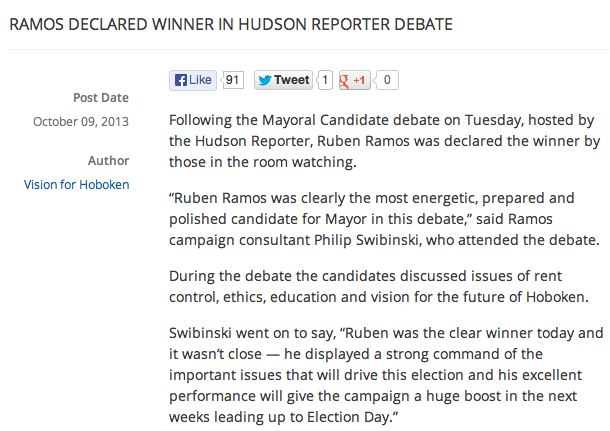 Talking Ed Note: Who was in the room? We just don't know but perhaps we should allow the public some time to actually watch and decide for itself.  There's been some discussion about positions on the rent control question and as one can guess Timmy Occhipinti under Frank Raia's tutelage is taking the pro-developer position.  (The mayor remains a "no" due to concerns about tenant protections and Ruben Ramos punted by pointing the finger and avoided taking a position.)

Raia of course last year remains the subject of much discussion when his name came up in the infamous Carmelo Garcia Rat Tapes. At a lunch Garcia was secretly taping he spoke about hundreds of vote-by-mail ballots drowning in a basement accident.

Some discount this as an urban legend being that the vote-by-mail numbers were at staggering highs from that part of town which is campaign prone - the Hoboken Housing Authority.  The numbers were in the area of 800.

Who's taking the over and under bet on the Timmy Occhipinti campaign on that number?

MSV is going to say whatever final tally comes in, it will be staggering - even with Timmy's meth lab "campaign worker" unavailable this election cycle.

Some are asking what the Raia-Mason slate is up to (other than their manufacturing lab for vote-by-mail buys) but they have surfaced to break the law on the other side of town.  Here's what one reader sent in showing their disregard for local ordinances with an affixed campaign sticker:


Last, thanks for all the folks leaving election stories tips in the comments section and via email.
But boy, you guys are getting tough to keep up with!  Seriously, an impressive and well informed readership - that you are!