MSV spoke with Alan Skontra about his new book, "Legendary Locals of Hoboken." Among the aspects discussed are his insights into Hoboken past and present and how the photography played a role in connecting the two with the lasting impact on him after completing the project.


You've mixed the Hoboken past and present and blended them together. How did you arrive at that concept and the black and white photography?

The book is part of Arcadia Publishing’s Legendary Locals series about interesting people in cities, so I had to follow some uniformity, such as all the pictures being black and white. But otherwise they let me pick who I thought should be in the book and in what order. Going in, I knew a book about Hoboken people without Frank Sinatra would seem lacking, and since I was going to have to include him I figured I should find lots of other people from the city’s history. I was interested in doing that anyway. I also knew putting in a lot of people alive today would generate interest. I do like seeing contemporary people juxtaposed with their historic counterparts, such as the Valastro Family of Cake Boss sharing a page with the original Carlo of Carlo’s Bakery from a hundred years ago.

A book has to end somewhere. It must have been very difficult figuring out how to capture most of the present. Tell us how about that struggle and any funny stories you encountered on the way.

Arcadia keeps all of their Legendary Locals books at 128 pages, so that ending came quickly. I wish I had 1,000 pages, and I know I would have been able to fill them with people here. The last chapter is about contemporary Hoboken, and I decided to group people together at the end who echo some of the themes or concepts that I had discussed throughout the book. So that’s where I put Sinatra tribute singer Eric DeLauro, the vintage Hoboken Nine baseball team, and waterfront activist Helen Manogue. I got lucky in getting the idea to put husband and wife Chris Halleron and Ann Wycherley on the last page. I was walking through the A&P parking lot when I suddenly realized that they and their son Jack are the quintessential Hoboken family. A few of Chris’ friends joked to me, “Oh, you had just enough room to squeeze Halleron in there,” but I’ve always said that they’re my closers.

What was the most surprising elements you learned about Hoboken's past?

I don’t think I was surprised too much about the history, in terms of big things. I was already at least familiar with the Stevens family or how Hoboken began changing in the 1970’s, for example. And, while I did do research, the book’s short photo caption format meant that I had only so much room for details. But I did discover historic individuals who I found very interesting, people like pianist Blind Tom Wiggins, silent film actress Dorothy Gibson, and reverend Hermann Bruckner. Wiggins was born a slave in Georgia but died here, Gibson was born here but died in Paris shortly after World War II, and Bruckner came from Germany and ministered at St. Matthew during the first half of the 20th century. All three had pretty sad lives. Though I had limited space to tell their stories in the book, I have infinite space to think about them, how they lived, and how Hoboken at the time affected them. They’re so interesting to me that I’m going to be thinking about them for the rest of my life.

What do you think might be the most surprising facts Hoboken residents will learn from your book?

I don’t know if I would cite any single fact, but in terms of surprising people with something they didn’t really know much about, I hope people will consider the extent of the military’s presence here during World War I, when it shipped three million soldiers overseas. Hoboken basically became a high security military base, and that suddenly affected the way residents lived, worked, and even whether they could drink alcohol or walk down certain streets. To my knowledge, the military had never done anything like that to an entire city before or hasn’t since. I want Hobokenites today to imagine how that experience must have felt. The other side to that involves the soldiers. Consider that men from all over the country passed through here, and that for over 117,000 who died overseas, Hoboken was the last piece of American land they ever stepped on.

Is there anyone you regret you didn't get to feature?

I regret not really including anyone contemporary who is a teacher or otherwise involved in education. I considered several people, but some of them declined or didn’t respond, and with others I wasn’t able to schedule time to take photos before the summer began. In terms of notable people, I was never able to contact Natalie Morales of the Today Show. I think I tried ten different ways. I didn’t need to interview her, just get a high resolution photo, but neither she nor anyone from NBC ever responded. I couldn’t get Stevens alum Samuel P. Bush, who was a steel company executive in Ohio and the grandfather and great-grandfather to the two Bush presidents. Not even the Bush libraries have a good photo of him. I also wanted to include Benny Tudino, but when I went to take his picture he was in Albania for the summer.

How has the book affected your view of Hoboken?

I imagine writing the book has been like renewing wedding vows. I fell in love with Hoboken the very first time I came here, and I’m still finding things to love about it. I see the book as my best attempt yet at expressing that feeling. Still, I always try to look at Hoboken as an outsider. I grew up in the south, which is basically another country. I think my perspective as an outsider helps me stay objective. This is a compact but dense city, and I think people here tend to get stuck looking at things through too much of a localized perspective. We forget that this is one square mile of land and that there are 3.7 million other square miles in the rest of the United States. I always want to look at things here without bias and also within a greater context. If people read the book and think I still captured the city while doing that, then I’m happy.

What else would you want to share with Hoboken residents about your experience doing the book?

I do want people to remember that the book is part of the publisher’s series, and that I had to follow certain rules. For example, people may say I left out so and so, but I had a small page limit. Then I’m sure people dislike that I included certain people, whether for personal or political reasons, but I think objectively that everyone in the book deserves to be there. Finally, I know people will read first for content, but as a writer I hope they notice style too. I treat writing as a serious craft, and I’m always trying to sharpen my work. I might use a thesaurus to pick a more precise word, add a certain word for alliterative effect, or even count the syllables in a sentence and compare it to the ones before and after it. My favorite teacher in graduate school said that writing compares to music, so I always pay attention to how writing sounds. As I write I try to imagine what you’re hearing in your head.

Why should people buy your book?

I did the writing, but the stories in the book belong to the people of Hoboken. I wanted to collect and organize the stories in a way that helps people here have a better sense of where they live, because I believe that place really shapes who people are. I want the book to put everything about Hoboken on a table – the history, the people, the accomplishments – and for people here to look at everything together and be proud of where they come from or live now. I also think the book can appeal to people outside of Hoboken, because we’ve given the world many good things, such as the Stevens family’s technological accomplishments, and also because there are themes in Hoboken’s history that exist in many cities, such as industrialization, immigration, transportation and gentrification. People in other cities can relate. I want those people to know about Hoboken. They should. I really meant it when I wrote on the back of the book cover that street for street Hoboken is as interesting as any city in America. 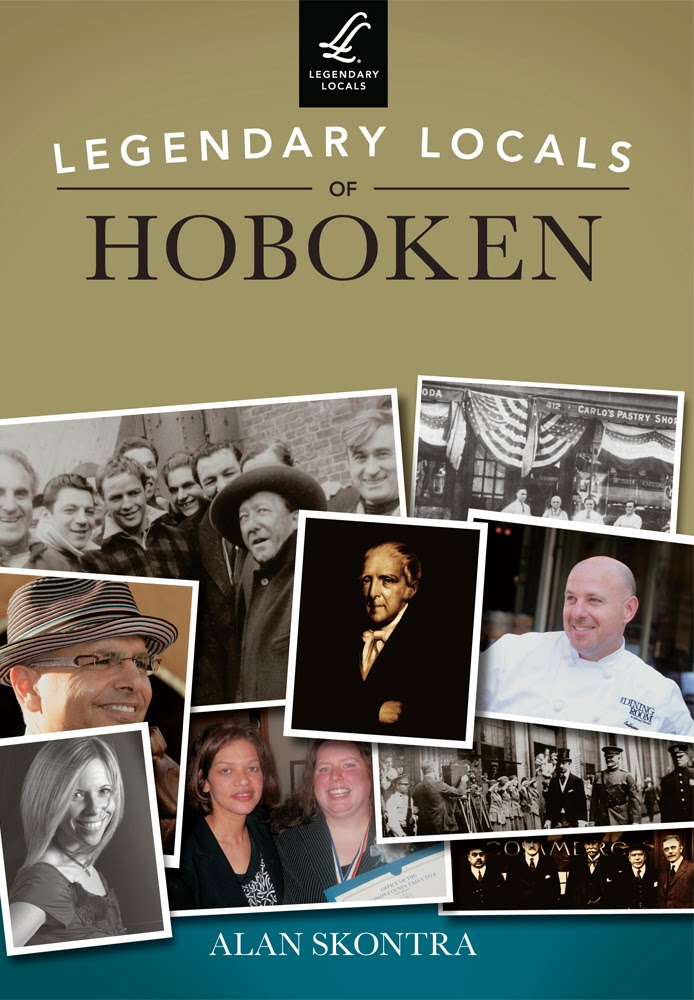 Now on sale: at Amazon, bn.com or through:
http://www.arcadiapublishing.com/9781467101059/Legendary-Locals-of-Hoboken