Update: The Paypal button has been updated and now works.


Approaching five years, MSV is the go to place for Hoboken government, politics and corruption. It also happens to be the local website generating the most comments.

Free speech trumping totalitarian and cynical censorship in all its forms is the watchword here.


Choose one option. (Button has been fixed.) Thank you.


Scores of exclusives, stories other local media refuse or won't report have driven readership here past 4,000,000 sets of eyeballs. People come back knowing it's not going to be long before another story is broken and maybe solely reported here for whatever reason: resources, editorial choice or yes - politics.

It's an honor to serve you and this fine City of Hoboken we call home. It also comes at a price.

As online journalism explodes overtaking traditional print media, the paradigm of how to cover costs is one with no easy answers. All involved are moving to find how to sustain the journalistic mission getting out critical information to the public. It's the case here with MSV and a cynical SLAPP is nothing anyone ever plans for but craven power hungry politicians are what they are and look in the mirror telling themselves the same repetitive sociopathic lies to justify their actions (and that of their underlings). Some will be surprised when the truth comes to the fore - and it is coming.

Just over two years ago while winding up an interview, one Old Guard insider offered insight about the upcoming SLAPP suit saying MSV "made people angry" in the Hoboken Soprano camp. No names were confirmed but the worst kept secret in Hoboken among media, political observers and Hoboken insiders is Beth Mason opened the family checkbook agreeing to launch a cynical attack on the First Amendment against numerous Hoboken residents well into double digits.

A Hoboken media person made clear to MSV the lawsuit was about the 2012 BoE November election. According to that insider's knowledge, Beth Mason who came out in a big way for the BoE Move Forward Nazi Truck ticket saw that election as the launching pad to take back City Hall. Consecutive sweeps by Reform have not lessened her vindictive retaliatory impulse to obtain cynical revenge using the civil court system. Sworn depositions confirm the same and worse.

The truth does have a way on occasion of coming to the fore. If anything, MSV has understated the truth and discovered the inner workings of those among a dwindling group of deluded Masonistas is more nasty and craven than anyone imagined. The revelations may show up on CNN or similar when legal determines the time and place of our choosing.

In the face of these cynical tactics in our Mile Square, MSV has not wavered and continues to serve Hoboken and promotes the free exchange of ideas here inviting all comers. If you have an argument, put it forth and let the tens of thousands of visitors here monthly decide.

Da Horsey hopes you will take it upon yourself to play a part in seeing it continues in 2014. 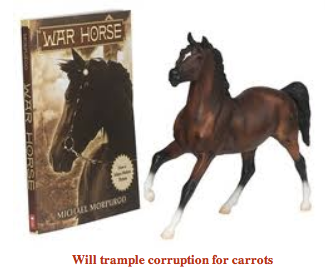 Those who made payment received a second Paypal notification email saying any potential "second"
payment is suspended.  Thanks very much to those who have already subscribed.
Posted by SmartyJones at Sunday, June 08, 2014