I believe the Argyles will win

Going against the grain, Da Horsey is not being contrarian in picking the Lionel Messi train to derail conventional wisdom Germany will raise the World Cup trophy today.

Argentina has not demonstrated dominance in the tournament while Germany saw a win for the ages against the Selçåo, an emotional but tactical disaster when Brazil took the field in the semifinal without two of its top players. This was not the Brazil of old which could see a top tier talent take the field when one of its stars had fallen.

No World Cup tournament has held so many surprises and today we may see another. Too many make too much of Brazil's dramatic defeat resembling more the Reggae Boyz of Jamaica than a legacy futbol powerhouse.

Today the key will be the amount of space between midfield and defenders. Germany shows weakness on the wing and the Argyles may be able to exploit it, especially on the right as Algeria amply demonstrated. People have already discounted and forgotten the tactical defensive discipline Los Gauchos (the Cowboys) showed against a powerful offensive side in the Netherlands.

Germany is okay but they like Heidi Klum are overrated. All the dark brunette filly power is in Argentina and those continental vibes will be felt from Buenos Aires to Rio.

It's  La Albiceleste (the White & Sky Blue) over die Mannschaft (The Team). 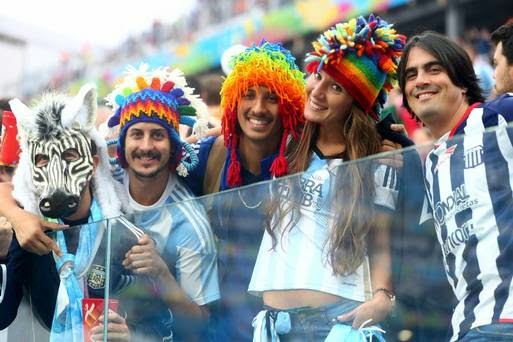 Germany prevails in a narrow 1-0 win in overtime. Argentine keeper Romero will be haunted for surrendering the OT goal on an angle he should not have surrendered.

In the end, Germany takes the World Cup against a gallant, game Argentina.
Posted by SmartyJones at Sunday, July 13, 2014