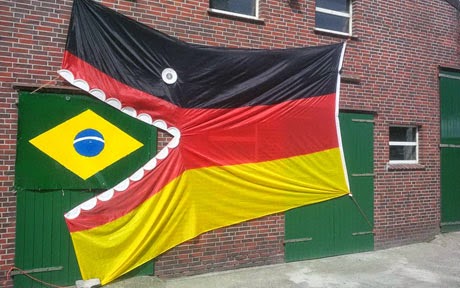 The July City Council meeting is set for tonight but the third speck from a sun in the Milky Way is transfixed by a meltdown yesterday in Brazil. For an American audience it's hard to explain what it means but sport is not the context to do so.

As one Brazilian said some years ago failing to win the World Cup, futbol is what Brazil gives to the world. If we don't win, our self-esteem is awful. Or something along those lines.

In 1998, Das Pony was in Paris for the World Cup. Brazil played host France for the prize in what turned out to be the biggest party Paris had seen since World War II. After the win, jogging up the hill on Rue de Monge a few of the French walked about as if nothing had happened at all. But most of France got into the spirit of the moment. It was quite a party and Da Horsey had a birds eye view from atop the Bastille.

I'd venture to say that's the last time you could climb atop and not be arrested. At least a dozen people were aloft on the structure with a view of the square and 2,000 people. What a scene.

If today you don't feel sad some for the Brazilian people, well... you probably have no heart and don't understand. Da Horsey isn't going to try to explain.

Random notes: On a different front in Hoboken, three pathological liars walk into Hudson County Superior Court with certifications.
There's a punch line but I can't talk about it. You can of course trust Da Horsey, it's all true.

photo courtesy: The Telegraph
Posted by SmartyJones at Wednesday, July 09, 2014