Five years ago today, Da Horsey penned its first feature in the wake of Operation Bid Rig and the downfall of a once rising star, Hoboken ex-mayor Peter Cammarano.

Some will find irony in today being the day a special meeting of the Hoboken Housing Authority  with termination of a contract for one Carmelo Garcia listed on the agenda. Others will turn away and pretend they see nothing at all.

Let's not fuss about who took money from who and who has no ethics with malfeasance and arrogance pouring out of every pore.

We're not talking about the past. 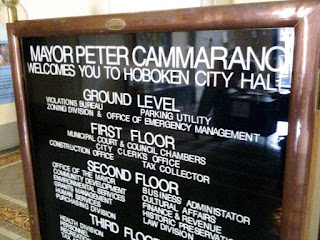 
Talking Ed Note: Five years of service has come at a price. Based on conversation with readers, some may have missed the latest with another spurious (and perjurious) legal claim filed by a HHA resident claiming harassment in a meeting room filled with observers and Hoobken police standing feet away.

Yet another SLAPP against common sense and decency. That's how the perjurers and their pals roll. MSV's attorney is on it.
A little help is appreciated in taking on the corrupt in this town.

Thanks very much to those who do.