The following letter was submitted on behalf of the Hudson Street Alliance (HSA). MSV offers Stevens equal time to respond publicly here sending its reply for publication to smartyjones@me.com.

In response to the article “Stevens Gateway Hearing Postponed – For Now,” I would like to articulate the position of the Hudson Street Alliance (HSA) on the Stevens’ proposed Gateway Complex.

Stevens is proposing to construct two academic buildings on the northeast and southeast corners of Hudson and 6th Streets.  They advertise the structures as being “five stories.”  Since building stories can vary and zoning requirements are stated in feet, it’s more accurate to say that their proposed buildings will be 97 feet tall.  That exceeds the 40-foot zoning restriction by 57 feet.  A skyway connecting the two oversized structures will further block existing views for Hoboken residents, as well as air and light. 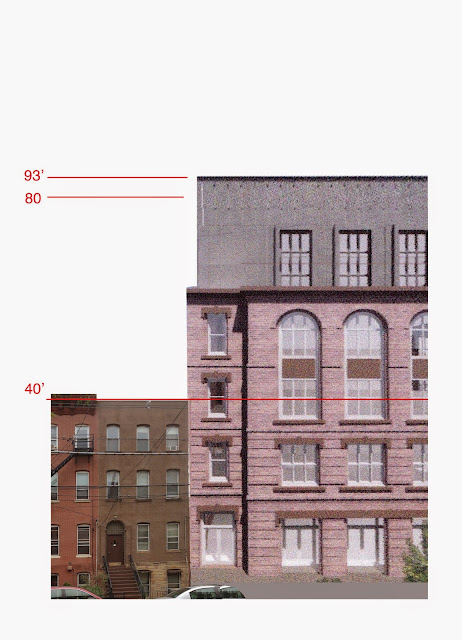 One of the proposed structures replaces a 36-car parking lot, yet no alternative for those spots is in the plan. Nor is there any proposal to create the 120+ additional spots of parking that are required under Hoboken zoning for the new buildings. Stevens has yet to fulfill its commitment to provide parking for the Babbio Center or to complete construction of the parking facility on Sinatra Drive, an eyesore in our community for almost a decade.

Hudson Street is designated a historical preservation district under the Hoboken Master Plan and we should ensure that its historical integrity is preserved.  Stevens was quoted saying that it wants to preserve the “sylvan” character of its campus.  By pushing ill-fitting development onto the perimeter, Stevens shows a disregard for the intrinsic character of the surrounding neighborhood.

When Stevens brought this proposal to the Hoboken Historic Preservation Commission on September 8, several residents voiced concerns about the number of height, lot coverage, density and parking variances Stevens needed to gain approval.  Over 200 Hoboken residents have now signed the HSA petition opposing the Gateway Plan as it stands.

We are right to be cautious and wary of Stevens’ plan for expansion.  Fourteen years ago, Stevens proposed relocating their physical plant from Sinatra Drive to Hudson and 8th Street.  The local residents rallied to protest this action, personally covering legal fees of a grueling 18-month-long battle. The zoning laws from which Stevens is now seeking variances are the very ones that were subsequently adopted to protect the residential and historic character of this area and prevent future inappropriate development by Stevens.

What’s the bigger picture? Stevens is planning to double its enrollment of undergraduate students (to ~6,000) in the next five years.  Already they struggle to find sufficient housing and academic facilities.  What will be the impact of their ambitious growth plan on the greater Hoboken community? Stevens has not revealed their master plan to address their long-term facility needs.

HSA is not opposed to all development by Stevens.  We only expect them to reasonably abide by zoning requirements, respect their neighbors’ quality of life and preserve the historic character of our community.  What does the future hold if we do not insist on Stevens’ compliance with zoning requirements, the same ones that all the rest of us are bound by?