The Port Authority report stating numerous problems with a deficit running in the hundreds of millions included service reductions in Hoboken and Jersey City on the PATH train.

The executives over the agency, Governor Andrew Cuomo and Governor Chris Christie have made statements already supporting the agency report. In addition to consideration of eliminated overnight service, the plan calls for other entities to combine with public and private entities to cover the red ink.

Candidates for such consideration could be NJ Transit and the MTA or other entities combined with federal transportation grants.

Federal transportation aid is thought possible in the amount of $15 million.

The Port Authority notes in its report, the PATH system is losing $300 million annually and says reducing service between 1:00 and 5:00 am on weekdays and weekends would save approximately $10 million per year. 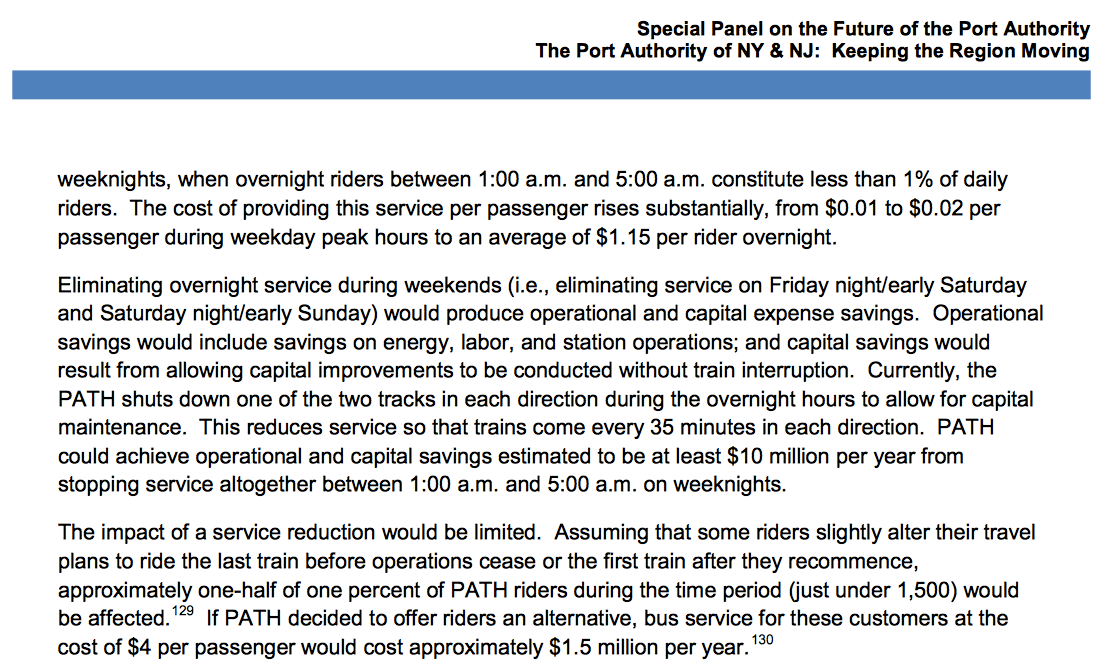 
"This irresponsible proposal is a classic example of being penny wise and dollar foolish. Shutting down overnight PATH service will cost the State of New Jersey many times the supposed savings in lost economic activity, sales tax and business tax revenues. Cities like Hoboken, Jersey City and Newark are growing because residents and businesses want good access to transportation options like the PATH. It is incomprehensible that any New Jersey official would be willing to even consider this proposal that would only hurt the State's economy."


"I am sharing this info as the initial report from the Governor's offices of NJ/NY is troubling. I think the fact they would release this on a weekend between Christmas/New Years speaks volumes but even more than that, buried in the many proposals is one that residents should know and be concerned about- reduction of service to the PATH.
Investment in mass transportation is crucial and any proposal counter to that is counter to the interests of the state regardless of one's party. The PATH's economics are not dissimilar to any train system in the country, it serves at night working families the same as it does people enjoying proximity to nyc and It has more than 100,000 users per year late at night. The hope is that our elected legislative leaders in trenton make sure this doesn't move forward."

Hoboken's mayor signified a major fight urging its residents to gear up for a battle in a tweet yesterday:

The Port Authority says this is the beginning of an overall discussion. The agency however is considered unwieldy and less than responsive to concerns of the public. A recent legislative package of reforms was rejected by Gov. Chris Christie and Gov. Cuomo. Both he and Gov. Cuomo have proposed an alternative reform package.

The full Port Authority December 26th report is available at the link:
https://www.governor.ny.gov/sites/governor.ny.gov/files/atoms/files/SpecialPanelReporttotheGovernors2014-12-26FINAL.pdf

Talking Ed Note: Both mayors are concerned the loss of 24 hour PATH service impacts Hoboken and Jersey City on multiple levels. Anyone who has ridden the PATH late on the weekend knows the trains are packed.

Reducing service means isolating both Hoboken and Jersey City and making them less viable as extensions of the dynamic NYC area. The economic impact isn't clear but it can't be positive for residents and local businesses.

The Big Story is still coming...
Posted by SmartyJones at Monday, December 29, 2014