Events accelerated at a whirlwind pace on the SandyGate front in Hoboken as another blockbuster hit the Christie Administration earlier Friday afternoon.

First, Hoboken is cooperating with the US Attorney's Office which presented a subpoena for documents related to communications with the Governor's Office.

For nearly two weeks, we have been voluntarily providing documents and answering questions from the U.S. Attorney’s office. Today the City received a subpoena for documents and we will continue to fully cooperate with their investigation.

Earlier today, the NY Times reported Gov. Christie's childhood friend and former official of the Port Authority released a statement via his attorney the governor was in fact aware of the lane closures to the George Washington Bridge at the time it occurred.

Related: Here's the Star Ledger feature story on Wildstein and his Gov. Christie connections past and present with the newest bombshell charges.

MSV would note Ted Sherman is a co-author of this article and it's a must read.

BREAKING: THE CARMELO GARCIA RAT TAPES - OUT IN THE OPEN!!

By his own hand, Carmelo Garcia relinquished his infamous Rat Tapes exposed last summer.  They appear in a short blurb on the Jersey Journal.


The timing of course is equally as interesting as what the actually tapes contain.  Carmelo Garcia made this tape in January 2013 and it's more than a year later.

Carmelo Garcia inadvertently saw the secret tape recording of the mayor's husband and former State Senator Bernard Kenny taken out his sole possession when attorney Louis Zayas of "ethnic cleansing" notoriety screwed up reading from a transcript of it in the Angel Alicea case.

The result was being forced by rules of court evidence to turn them over.

Leaks of the transcripts were published on Grafix Avenger primarily and on MSV as the drip, drip, drip of the tapes added to the utter embarrassment of Garcia including him talking to himself with the tape recorder running in the toilet.

Garcia thanked God for working with him to try and set up others on the tape while ejecting some other unseemly material into the wash.

Talking Ed Note: When the details of Garcia's transcript began to get out, the "ethnic cleansing" lawsuit was released and has since been thrown out of court.  An amended version has been resubmitted in the same unique Carmelo Garcia style of maximum whining of victimization with no evidence of damages.

Hat tip to the Jersey Journal: Now show us the follow up on why this matters and why now.
The only person doing any misdeeds on this tape is Carmelo Garcia.

Perhaps the US Attorney's Office will be interested in a federal employee attempting to trade on a federal contract.

Update: Gov. Chris Christie's childhood friend and former head of the Port Authority has given him up on BridgeGate according to a NY Times story, making any distraction with this story a moot point.

Carmelo Garcia has exposed himself on this tape in the end for nothing but further amusement and embarrassment.  Not to worry, he'll continue to say the opposite of what is said on the tape anyway.

Beth Mason pays homage to "Year of the Horse"

With no substantial number of Chinese residents among local voters, a strange advertisement appeared in the weekly paper in the usual prominent page three location as the last two years or so.

The ad will not make any Super Bowl advertisement buzz and most Hoboken residents won't know it ever existed.
Touted via the shadowy Mason Civic League "charity," the ad celebrates the Chinese New Year and "Year of the Horse."

Is the ad an attempt at outreach to your favorite equine journalist, Da Horsey, SmartyJones? 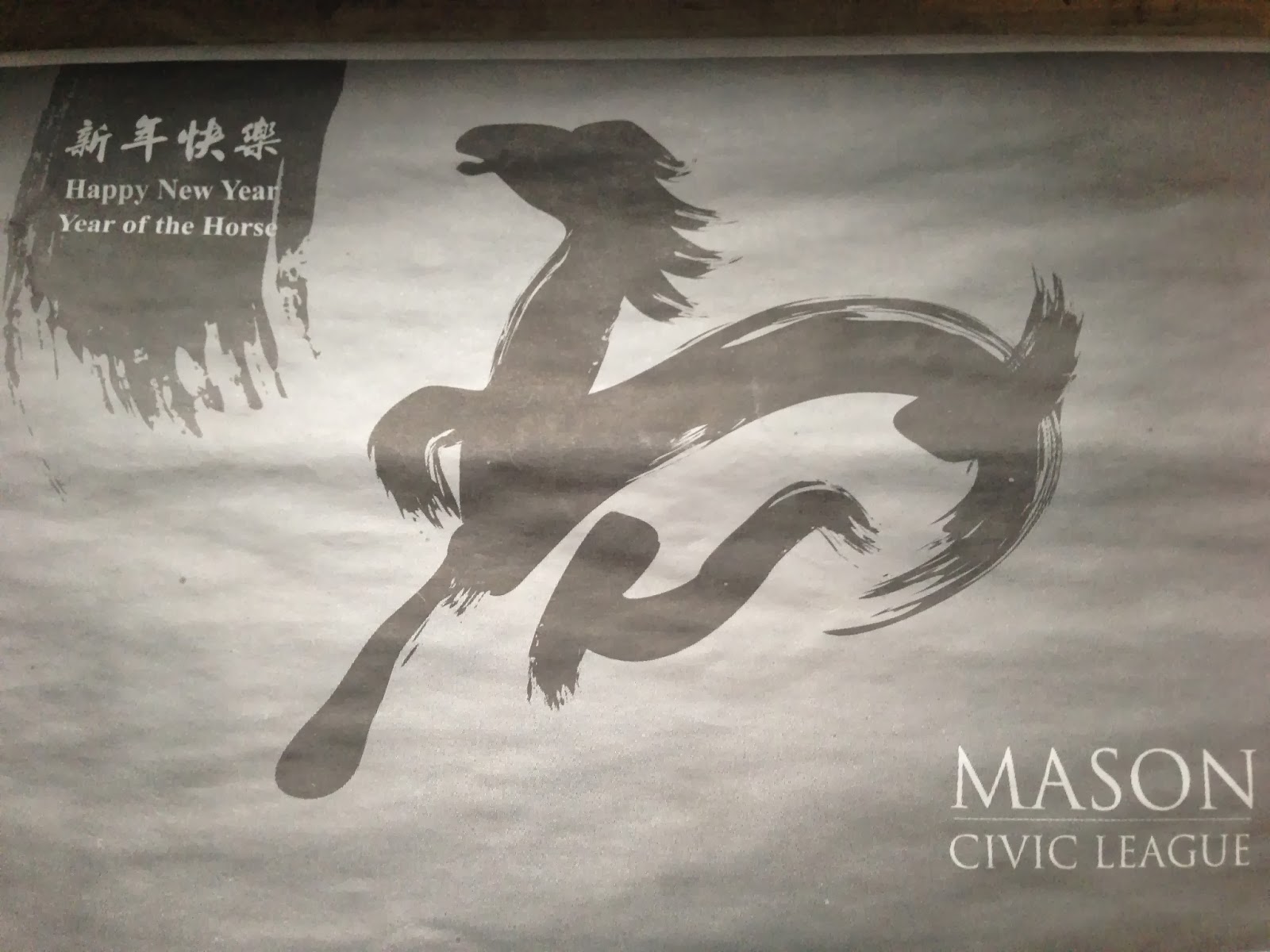 Hudson County and Hoboken political experts say it's the Mason family not performing a civic activity that struck out to stop public discussion by the Hoboken public on Beth Mason's political activities and behavior by using her long time hard core political operatives to SLAPP them silly on the Hoboken blogosphere.

Both Beth Mason and one of her political operatives publicly announced it months before any filing was made public.  Was such threat of frivolous lawsuits going on before then? Think years.

While the pro Old Guard rag continues to cash checks and prominently featured Beth Mason's comments about cyberbullying in a suspect story where it didn't reveal its relationship with Mason and company, it's been completely silent on the question of the Mason's family's role in suing Hoboken residents to silence their First Amendment rights and public participation.

Does that constitute participation in a wider conspiracy with other Beth Mason political operatives?

Is all this coming out in the wash or is forgiveness possible?  Anything is possible with the proper restitution. Will FinBoy be bottom crawling down from Weehawken waving a white flag asking for a truce?

Or is it too late and everything's coming out in the wash with prominent stories in the NY media?

Talking Ed Note: Someone posted a typical political negative comment against the mayor recently, which is of course all fine in the free libertarian discourse here. But they also made reference to a resident's family situation.  True or not, it's most definitely not cool.

On the news front, another Hoboken centric story in the NY Times highlights the Rockefeller Group cutting ties with the law firm Wolff & Samson closely aligned to Governor Christie.  One has to wonder if that story will get wider attention or more of the dreck with "ethnic cleansing" lawyer Louis Zayas, who is milking any attention he can get in his Andy Warhol fifteen minutes.

Zayas is telling anyone who will listen his request for meeting notes of the mayor, or lack of same, are equivalent to her producing and turning over a personal diary to the US Attorney's Office.

Are business notes and personal diary entries one and the same?

MSV suspects Zayas is playing fast and loose with the truth, Carmelo Garcia style. Problems with the truth are rubbing off and once the Feds move ahead with their investigation, his claims will soon be forgotten.

This is the same lawyer after all who before garnering national attention and disrepute for his "ethnic cleansing" lawsuit thrown out of Hudson County Superior Court, filed a suit against ex mayor Peter Cammarano AND the Mile Square city saying the City of Hoboken should pay back loans some residents and political operatives made to the former mayor.

Most lawyers would be ashamed of such a filing and try never to top such an atrocity, but somehow Louis Zayas did just that.
Posted by SmartyJones at Friday, January 31, 2014
Beth Mason pays homage to "Year of the Horse"
2014-01-31T09:18:00-05:00
SmartyJones
Comments