The Old Guard is mobilizing behind Freeholder Anthony "Stick" Romano, one of their own who is expected to continue in a path where taxes are not a high priority and the favor bank cultivated behind closed doors is the system most adhered.

The election is shaping up as one where the Old Guard will appeal to its base in subsidized housing in Hoboken: Marine View, Church Towers, Applied, etc. and hope to turn out enough votes to offset a sleepy spring electorate in a primary election.

On the scene in front of Romano's HQ is a familiar face working for Beth Mason who is well known for rounding up those elusive votes in the Hoboken Housing Authority using the "hand me the paper ballot and we'll fill it out for you" voting system.

Oh Vote by Mail how you've been so missed these many months.

Then there was this little gem of divide and conquer fame appearing on Facebook: 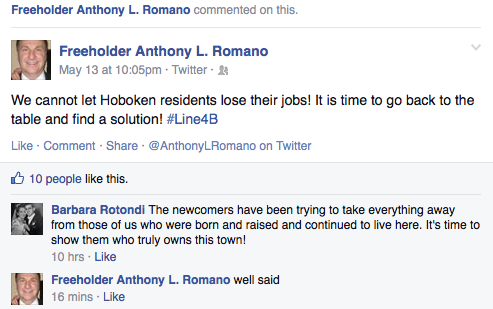 Talking Ed Note: Stick Romano appeals to the funding gods in a nice guy call that jobs on the Hoboken BoE won't be lost. Nothing wrong there.

What follows is the more base instincts playing the blame game and an old divisive card. Well election season doesn't often bring out the best in some.

Phil Cohen is running a positive campaign in Hoboken and Jersey City. This election may mean we'll have to wait and see who shows up to vote.

This Freeholder election is most important with the dynamics of change on tap as Mayor Dawn Zimmer and Jersey City Mayor Steve Fulop are teamed up with a unique opportunity to move county government in a new direction. Together, they have an opportunity to drive a freeholder majority in a direction Hudson County has never been nor may wish to go.

On June 3rd, Hoboken voters will have an opportunity to move that change forward at the County, something not many thought possible any time soon.

But here it is.