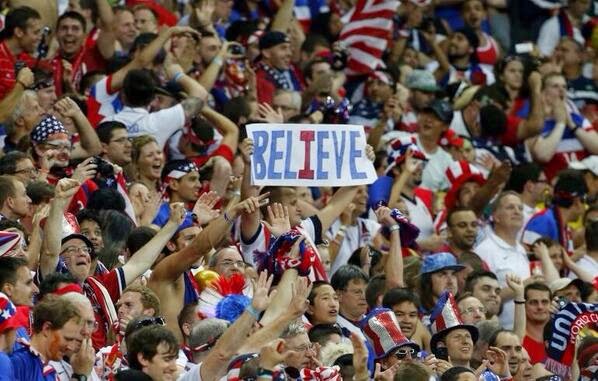 Downtown Hoboken is littered with US fans who saw a 1-0 defeat to Germany but a resilient US national team fought and came close late to equalizing in a gallant effort.

As one person said passing on the street to a thumbs up, "We're through!"

Trending now on twitter: "I believe" that we will win.

The Beautiful Game takes over America

On Sunday, a fever took over America. If you were at any public venue with a TV, the cheers, the groans told you something important was going on. Over 24 million people in these United States stopped and looked to Brazil watching the US Mens National Team take a major step toward getting out of the Group of Death.

In the final seconds of injury time, the party ended when a goal was surrendered yielding a tie. So today the US faces perennial power Germany, most likely needing a win or tie to advance into the Round of 16.

We're going to have our hands full.

At 12 noon, the US will be kicking off meaning there will be a lot of people disappearing from the office and not returning until about 2:00 PM. Don't bother calling anyone with your customer service complaint, don't call any company and think you will have their full attention when you talk about the lack of quality in such a such a product.

You're wasting your time. Don't fight it. Don't be a nincompoop and try to find someone to blather how this is not an American sport, it is. We have a national team to be proud of win, lose or draw today.

Learn the beauty of how the ball moves, the chess game and art combined together in a song where national pride is on the line and the defining moment comes with the emotional surge toward the final effort with a goal.

Let us run rampant down the right wing. Let Captain Clint Dempsey find space and Michael Bradley regain his form and the always beyond reliable Tim Howard be there in the right place as the inevitable flood comes flying toward goal.

No matter what happens today, put aside your work, your troubles and your heartache and embrace the biggest stage in sport: the World Cup.

Be proud today. This is the beautiful game and America is shining on the big stage.