An ethics complaint filed back in 2010 is in the news as a NJ administrative judge has ruled that filing against Councilman Ravi Bhalla is frivolous but went much further slamming the complainant as "bigoted" and "malicious."

An administrative law judge has tossed an ethics complaint against a Hoboken councilman, finding that the allegations of a conflict of interest were "wildly speculative" and made by a "local gadfly" known for launching bigoted attacks.

The "local gadfly" in the article is Hoboken Old Guard politico Perry Belfiore.

Judge James Geraghty tossed the ethics complaint stating Councilman Bhalla had no personal or financial relationship with the attorney in the complaint authored by Belfiore and the charges were "frivolous and unwarranted."

The article goes on to say the judge described Belfiore as a "relentless political antagonist."

Councilman Bhalla is reportedly pleased with the ruling and said the decision aptly ends a five year smear campaign against him saying, "I'm happy the judge cleared my name."

Last November, Bhalla was the target of a relentless well financed campaign against him when he ran for re-election. Much of the vitriol came from online political operations believed by many to be  underwritten by Councilwoman Beth Mason.  A suspected political operative of hers was thought to have written some questionable and what was considered by many racist remarks under the screen name Ravi Ravioli on Hoboken Patch.

Late in the municipal race, Councilman Bhalla said he was considering filing civil charges against Beth Mason for defamation. After his election victory, he did not do so.

The NJ.com story says Beth Mason was not available after two days of attempts to reach her for comment on the story. She was in attendance at the special City Council meeting last night.

Sign of the Times: QLC eats it as two of three slates ain't bad?

Last night the Board of Education forum took it on the chin when one of the three slates didn't appear.

It's unclear the full details leading up to the final date selected but the word is the Quality of Life Coalition first attempted to hold the forum on the same evening as the monthly Board of Education meeting. Three commissioners on the board are candidates in this election. That meant the date had to be changed.

Parents for Progress stated they were given an alternate date two weeks in advance but no one checked to clear the date. One BoE observer said one of its members was out of town on business making it impossible for the slate to appear.

Helen Manogue who oversees the QLC sponsored forum reportedly voiced complaint saying the no show was disrespectful to the organization and the public. It was suggested one candidate did not respond at all.

The two Old Guard slates according to one observer piled on with a verbal assault on their opponents not in attendance. Perennial candidate Patricia Waiters complained she was not handed an appointment to the BoE as a minority when Carmelo Garcia had to step down earlier this year.

Update 1:20 - MSV hears from multiple independent sources the audience received a handout from QLC's Helen Manogue. It's reportedly private email communications from one Parents for Progress candidate on the scheduling conflict for the forum. (It's uncertain for the moment if the candidate cleared its release.)

While that was going on prior to the start, another QLC board member of more intrigue reportedly blogged on a Hoboken forum how she was "looking forward to meeting you tonight" adding "I know I have been critical of Kids First...  I hope you realize that all I intend to do is find out who I'm voting for."

Where was this communication being publicly posted? At 6:52 it hit the Hoboken Mom's forum.
It's clear QLC and its board members in attendance were well aware the Parents for Progress slate would not be attending.

How is obvious sandbagging acceptable action by a QLC Board member working an event for a Hoboken public interest group?

Updates will be done here in a public, transparent manner so:


QLC is invited to explain its position and the actions of its board members.


Who did what and why Da Horsey can't say as MSV was not in attendance. (A gallop was made over downtown to City Hall for the special council meeting.)  In the end will it engender controversy and impact the election outcome? As MSV has noted, the most important factor to date is two Old Guard backed slates lacking a full six candidates.

If Patricia Waiters is selected as the third place choice for both, she's going to be elected as a BoE commissioner.  What does that say (cough, cough) about Hoboken? Talk amongst yourselves.
Posted by SmartyJones at Thursday, October 09, 2014
Sign of the Times: QLC eats it as two of three slates ain't bad?
2014-10-09T11:06:00-04:00
SmartyJones
Comments

The following submission comes from BoE trustee Monica Stromwall. She was appointed unanimously by the BoE to replace Carmelo Garcia who by law had to resign earlier this year.

Some people may be wondering why the Parents for Progress ticket, Antonio Gray, Sharyn Angley and Monica Stromwall, were not in attendance at the Candidate Forum on Wednesday, October 8th at the Elks Lodge.  Let us explain why.

We were first notified by mail by the Quality of Life Coalition that a debate/forum was scheduled for October 14th. Unfortunately, that was the same date and time as the regularly scheduled October Board of Education meeting. This posed a conflict for at least 3 candidates that are current board members and candidates in the upcoming election.

When the organizers learned of the conflict, a new date was scheduled and was sent out with 2 week’s notice. But again, this was done without consulting any of the candidates--at least none of the candidates on the Parents for Progress team. Unfortunately, this new date conflicts with previous commitments and so we were unable to participate.

With the election still a few weeks away, there are plenty of opportunities to get to know us and ask us questions. The best and fastest way is to contact us through our Facebook page: Parents for Progress Hoboken or email at parentsforprogresshoboken@gmail.com. We are committed to improving upon and continuing the progress in the Hoboken Public Schools. 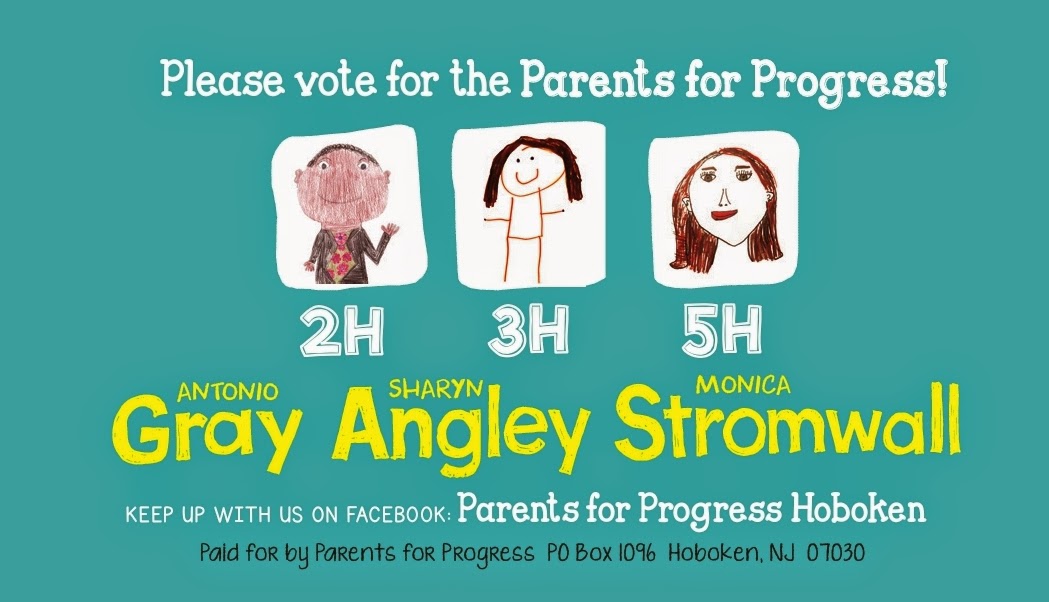 Talking Ed Note: The term boycott in the headline is MSV's choice and not the stated reason of the author. The headline is the responsibility of the editor.
Posted by SmartyJones at Thursday, October 09, 2014
Parents for Progress BoE slate explain reason for "boycotting" debate
2014-10-09T00:01:00-04:00
SmartyJones
Comments