While the Hudson County Board of Elections is tabulating the final provisional ballots into the election totals; there's only 86 ballots to be reviewed and tallied so the results are unofficially certain. Next week, likely Wednesday, the official certification of the election will be final.


The ladies from the slate Parents for Progess posted the following message from their Facebook:

Thank you to every single person that believed in us, we are humbled by your outpouring of support and confidence. This has been an amazing experience and we all have learned so much and made such wonderful friends. Thank you to our families, friends and supporters that have dedicated their time and effort to help us achieve our goals--you all are so special!

Most of all we would like to thank our constituents that took the time out of their busy lives to vote and show their support. We wish the other candidates the best of luck in their endeavors, running for school board is not an easy task and takes time, dedication and commitment. We look forward to the future and we are eager to continue the progress. Thank you again for allowing us to serve the students of Hoboken Public Schools.

If you didn't hear the latest wacky doings from the Wednesday night City Council meeting you could be forgiven for missing the tragic concern from the sitting Second ward councilwoman of a rodent meeting its demise at Chez Mason.

The hilarity didn't end there.


According to Councilwoman Beth Mason dogs, even "big ones" are facing killer possum attacks in uptown Hoboken. She's concerned about this and segues into another issue about a squirrel meeting its demise in her yard.

Mason continues to inquire why no one has gotten back to her on the reasons for the death of the rodent. She wants answers.

Key moments from late in the meeting. Beth Mason informs the council killer possums are going after her dog at Elysian Park.

There's also a rash of "monster raccoons." Beth Mason says, "It's becoming a real issue."
But it's not over... there's this exchange about a dead squirrel.

Beth Mason: related to that same issue... the.. I asked for a report back on that. I would very much like to know because of issues related to rabies... I have never gotten one.

Council President Jen Giattino: I asked (animal control) about rabies. In the last six months there has been no reports about rabies in Hudson County.

Beth Mason: I have some concerns because I had a dead animal in my yard... I asked for someone to get back to me on the reason for that, animal's demise, and I have yet to hear back on that.

Jen Giattino: Do you know anyone, when an animal dies is there an autopsy done on it?

This tragi-comedy continues as Mason later seeks "a rationale" why "that has taken place." She finally concludes:

Beth Mason: In our neighborhood everything from the ground hogs to the raccoons to the possums that are out. I had two possums out in the daytime. That's NOT good.


Talking Ed Note: Hoboken, please be on the lookout for monster possum big dog killers.
Beth Mason is on the job though, so there's that.


No, this is not parody or satire. This is Beth Mason. 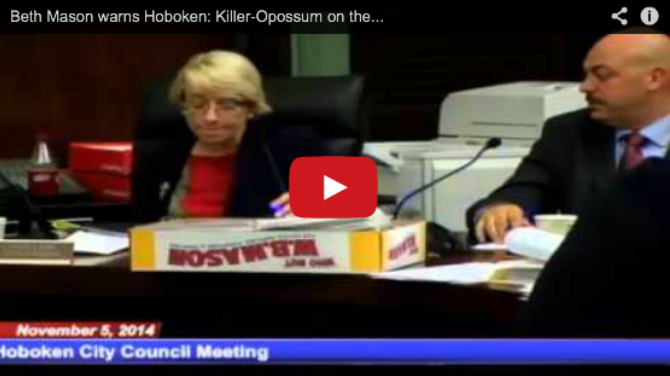 The Russians are coming?