The legal subpoena was delivered in front of the City Council just before the start of its September 17th meeting.

That subpoena has been ruled binding in a ruling in Hudson County Superior Court - both her and her husband must testify in the two years running SLAPP suit.

As a result, Beth Mason is now set to appear and testify in two separate cases this January.
Her next court date is scheduled for January 20th.

Related: The Beth Mason litigious criminal complaint alleging her victimization being served a subpoena in the SLAPP suit.

Outrage at Hoboken Vote by Mail fraud in BoE election

The following letter was sent to the Hudson County Board of Elections, Hoboken Mayor Dawn Zimmer, City Council members and MSV.

As a registered voter in Hoboken, NJ I am shocked and disgusted that NOT ONE of our elected officials or our Hoboken Mayor would contact you to request an investigation in regard to "Vote by Mail" fraud that is happening in Hoboken. It is common knowledge and the joke of our town that our elections are basically fake and no one seems to care!
This last Board of Education election had yet another Fraudulent "Vote by Mail" episode in which Peter Biancamano and Frances Rhodes Kearns had approximately if not more then four times the amount of "Vote by Mail" votes then the next candidate!!! Do you NOT find that odd?
When are you going to wake up and see that our elections are not working? When are you and the attorney general going to step in and oversee our elections? When is someone going to actually care about our Elections? 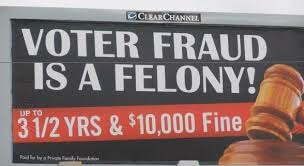 I strongly urge you to open up an investigation and report this to the Hudson County Prosecutor and NJ Attorney General at once. The time has come for Hoboken to have elections that are not taken over by corrupt, fraudulent and paid for "Vote by Mail" ballots. I am strongly requesting that Hoboken have a NEW board of Education election due to the current fraud that I believe took place and you would as well if you simply investigated the matter. Come to Hoboken and simply go to the 4th ward or basically go to the Hoboken Housing Authority where the predominate amount of "Vote by Mail" requests were made and review how many were returned. Then count how many were rejected due to wrong signature? Wrong Signature? How does someone Not know how to sign their name the same way, unless someone else signed the ballot for them? Also, just come here and ask the people in the Hoboken Housing Authority also known as our "Projects" if they were paid $35-$50 for their ballot unchecked! FRAUD FRAUD FRAUD AND IT HAS TO END!!!!
Lastly, the Hudson Reporter will NOT publish my "letter to the editor" due to the fact that I do not have the exact number of "Vote by Mails" per candidate from a “valid” source, so if you could kindly email me the exact results I would appreciate it. Something has to be done to protect our elections and the time is now for someone to stand up for our elections. I have been saying for to many years that Hoboken's elections are FAKE and now we need to put an end to this madness of paying people for their votes! The practice is disgusting, illegal and making a mock of our election process.