On Tuesday, December 16, 2014, the Hoboken City Council voted unanimously to fund the construction of Hoboken’s second flood pump. The 40 million gallon per day H-5 wet weather pump station with emergency generator will alleviate flooding in western Hoboken, including the area around ShopRite.

“This flood pump is part of the ‘Discharge’ component of the comprehensive ‘Resist, Delay, Store, Discharge’ strategy to make Hoboken more resilient to flooding,” said Mayor Dawn Zimmer. “I thank members of the community and all City Council members for their support for this project. While the City implements the Delay, Store and Discharge elements of the plan through pumps, rain gardens, green roofs, and new parks designed to absorb and hold stormwater, we look forward to working with the State to create coastal defense by implementing the ‘Resist’ strategy with the $230 million won through the Rebuild by Design competition.”

The pump, along with a pilot City Hall green infrastructure project featuring large cisterns and rain gardens to reduce stormwater runoff, will be financed by an $11.9 million low-interest loan from the New Jersey Environmental Infrastructure Trust which includes 19% principal forgiveness.

State Action Plan for 3rd Round of Federal Sandy Recovery Funds
Yesterday, the State of New Jersey announced its Action Plan for the third round of Sandy funding which includes $230 million for the first phase of a comprehensive flood protection plan for Hoboken, Weehawken, and northern Jersey City awarded as part of the Rebuild by Design competition. The Action Plan Amendment related to the Rebuild by Design plan can be viewed at: www.renewjerseystronger.org/wp-content/uploads/2014/12/APA-12-English-RBD-Amendment_FINAL.pdf.

According to the proposed Action Plan, feasibility studies will take 1 to 2 years, followed by approximately 2 years for the design phase, followed by construction. The New Jersey Department of Environmental Protection will receive the $230 million in funding and manage the project.

Public comments will be accepted through January 15, 2015 at 5:00 pm. Comments can be submitted at two public hearings, via email tosandy.publiccomment@dca.state.nj.us  and via U.S. mail to Jamie Saults, Constituent Services Manager, Sandy Recovery Division, NJ Department of Community Affairs, 101 South Broad Street, Post Office Box 800, Trenton, New Jersey 08625-0800. The City of Hoboken asks that written comments also be copied tofloodplan@hobokennj.gov so that the City can incorporate community input into its formal feedback on the action plan.

Two public hearings will be held during the comment period: 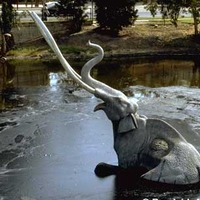 When Mayor Zimmer faced with a personal dilemma about the future of Hoboken and skyscrapers backed by the power of Big Government, with one mighty voice she stood tall and said "no."

That was facing down the Rockefeller Group, a Japan-owned consortium eyeing a magnificent tower 40 stories high and backed it appears by the most powerful levers of government in the State. As the Lt. Governor would later say, she would not apologize for jobs and economic growth re: progress.

Progress is the watchword as Hoboken stares down another government backed monolith but this one  far more powerful in NJ Transit. The City of Hoboken dared for some time to reverse course from the prior administration and argue against a proposed 70 story building surrounded by towers. To date, there's been some success with Mayor Dawn Zimmer, she the willing fighter in court on behalf of Hoboken who says go ahead make my day. This time not everyone thinks the courts would ultimately be the place for Hoboken to place all its bets. Trenton could enter and ease the way at any time.

The southern entrance way to Hoboken, the blighted warehouse views landscaped on one side with industrial rails on the other side is described as "historic" and beautifully "industrial" worth preserving. Well, that's one perspective and perhaps a sincere one. Other Hoboken residents say, if we must succumb to change, that's the place to do it and why not take the benefits of millions in tax revenues, affordable housing set asides and the economic engine downtown which can come with it?

If Hoboken doesn't find an economic engine to cover mounting public safety, health benefits and other costs who exactly is going to pay the weight of that increased freight? The Western Edge plan kicked around some years ago spoke to the concept of having commercial space to support the residential population on that side of town. The concept turned out to be less than economically viable.

So where is the commercial engine for Hoboken to come? The city has tried to present itself as a Manhattan alternative, encouraging tech firms to come and incubate here but it's not happening and won't lend itself to the revenues required for the local government appetite for tax dollars. For a primer on this, please see the total costs of public safety alone to the annual budget. (Hint: it's well over 50%.)

The Rockefeller Group promised much if they were given the right to transform the Hoboken landscape with a 40 story building and surrounding towers in a $1.1 billion project. The City and its mayor made clear no capitulation was coming even if a powerful governor gave it his blessing.

NJ Transit however is a beast of a different order - and magnitude. They hold not only ownership rights on the southern edge of town; they have the political muscle and worse, the political capital to align influence with NJ legislators. As some of you recall, NJ has a bit of a problem with corruption in all its forms when it comes to elected officials.

While there's been unanimity among residents and political factions to stop NJ Transit's nine million square foot monstrosity proposed, there's not universal agreement what should be done with the opportunity to partner in its place. Some residents complain the proposed plan represents if not over development in its current form, it's wrong for the City. Others say Hoboken has an opportunity to take something bad and turn it into something good. Who's right?

That all depends on how you interpret realism and Hoboken's future. If you are an armchair quarterback who has your slice of the Mile Square, you can sit back and urge not another stone be turned. Ever. Are you willing to see significant municipal taxes increases as a result? If not, then doesn't it require at least listening to the grown-ups attempt to find a way to maintain the stability Hoboken has seen in its municipal taxes under the Zimmer administration?

It's easy to throw bombs, bark at the clouds and demand no stone be added atop another in Hoboken. Does it solve any of the funding issues at present and into the future? It says here, it doesn't. A traffic study comes first and then the real negotiation with NJ Transit will begin. As it stands, rush hour traffic on the southern end is a mess and even a reduced development downtown will only add to those woes.

Perhaps it's better to look to economic vitality, seek out the options how Hoboken can cover its built-in costs and work with the opportunity posed directly in front of it. Further, take the opportunity to overhaul and improve the necessary infrastructure and some roadways with alternatives satisfying the congestion on the southern end.

Or you can make a fist and yell at the clouds screaming not one more brick. When the inevitable, far higher municipal tax bill comes, you can tell your neighbor how you fought the good fight, stood down progress and how sorry you are they will be moving as you too pack your own bags for departure.

If you don't have a real world solution, perhaps you might try delving into the details and spell out where's the alternative? If not, then your friend Big Government, courtesy of NJ Transit will come and impose the solution for you.

Don't you just love Big Government solutions as they cascade all around you? In the end, it very well could.