In an exclusive interview with the former business owner of the video truck connected to the 2012 Move Forward BoE campaign, better known as the Nazi Truck, Noel Torres stated all the transactions from payment to the controversial videos came in transactions via Beth Mason political operative James Barracato. 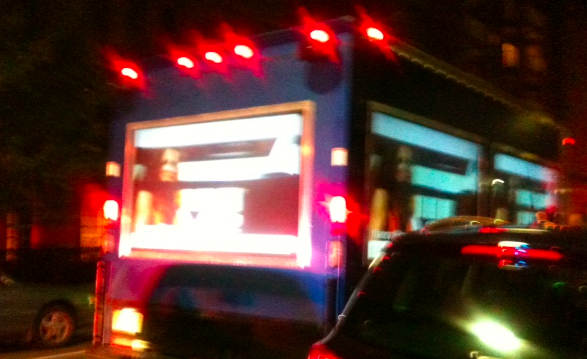 The Nazi Truck is notorious for flashing swastikas on two separate nights in an attack video against Grafix Avenger and numerous officials connected to Hoboken's reform movement back in the fall 2012 Board of Education election.

The Nazi Truck patrolled Washington St. and then parked one evening outside a BoE meeting and the following outside City Hall during a City Council meeting looping its attack video the whole time.

Detailing for the first time how the Nazi Truck transaction happened, Torres pointed solely at James Barracato saying, "I only met James. He hired me. I met up with him by the Lincoln Tunnel gas station," referring to a Weehawken location in the town where Barracato resides.

Why the remote location? Torres said, "He didn't want no one to see him or this stuff."

Asked about the possible involvement of others, Torres only referenced Barracato saying Beth Mason's right hand man was the sole person handling the videos and cash. He added there was another person with him during the first transaction: well known Beth Mason political operative Matt Calicchio.

"Matt Calicchio was with him. They were giggling about it; they were excited about it. I didn't know what I was getting into. It went pretty bad."


Torres highlighted receiving a USB stick with the videos already prepared from James Barracato who also paid him in cash: $2,000 for the first attack video, $1500 plus a $500 bonus as he described it "to keep this quiet."

For the second which focused an attack against this MSV editor where a personal phone number was featured urging people to call and complain, the estimated payment was $1,000. Torres said he thinks $500 was the payment for the fifth and final visit of the Nazi truck which featured a full blown commercial of the Move Forward candidates. All payments for the five video visits to Hoboken were made in cash.

In a January 9th, 2014 deposition in the Bajardi v Pincus litigation, senior Hudson County political operative Tom Bertoli tied James Barracato to the Nazi Truck. Asked about Barracato's role Bertoli said, "He was instrumental in putting it together."

Torres said he also wanted to clear up any misunderstanding that the Move Forward co-campaign manager Joe Branco had been involved in any way with the Nazi Truck. "Joe got a bad rap on this but I didn't do any work with him other than his nightclub business."


In a separate interview Joe Branco emphasized it took two years for the facts to come to light saying, "I had absolutely nothing to do with the truck. I had no knowledge of the video; no knowledge of who hired the truck or who did it."

He expressed dismay with the impact he felt being associated with the BoE campaign saying it caused him grief personally and to his business which continues to host numerous charity events.

Speaking more about the Nazi Truck blowback, Torres was upset with the reaction received driving around Hoboken on five visits. He said he didn't have any clue as to the contents of the video being controversial. "All the shit I got over this... people threw stuff at my truck. I got a lot of shit off of this thing. One guy wanted to fight with me but I never left the truck."

The Nazi Truck story and its five visits covered extensively on MSV and Grafix Avenger created a stir throughout the Mile Square.  Both of Hoboken's rabbis requested an apology for the 2012 appearances of the Nazi Truck parading the Nazi flag.

No public apology however was offered by anyone. The story reached national attention being covered in the Huffington Post.

James Barracato and former Move Forward co-campaign manager John Castellano were contacted earlier this evening. If either provides a response, this story will be updated.

Related: MSV covered the Nazi Truck story in 2012 here in the Move Forward campaign denial and on its fifth trip showing a Move Forward candidates commercial.

Da Horsey was the target of Nazi Truck scorn on its third and fourth trips. MSV covered those visits and inquired about which images of hate and bigotry the Nazi Truck thought needed eliminating exclusively here: http://www.hobokenhorse.com/2012/10/breaking-blue-nazi-truck-issues.html


Beth Mason seen heavily involved in hosting the Move Forward BoE campaign at her 12th and Washington Civic Association headquarters was fined by the City of Hoboken for making excessive contributions to the campaign.

James Barracato was also working at the Mason Civic Association at that time. Last October, Barracato penned an article on behalf of Beth Mason for Hoboken Patch. Yet more evidence Beth Mason doesn't write her "own stuff."

Tom Bertoli stated in his 2014 deposition it was Barracato running the Move Forward campaign on behalf of Beth Mason.
Posted by SmartyJones at Wednesday, February 25, 2015