He says it will be Hoboken resident Annette Chaparro! 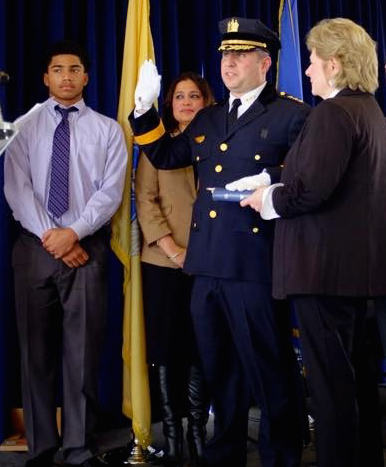 Since December, MSV stated Carmelo Garcia would be ejected by State Senator Brian Stack under his line in the upcoming Democratic primary and recently predicted a Hispanic woman was on the target list. It was unclear if Hoboken Mayor Zimmer would come to agreement with Stack but it appears that selection is made.

Stack who was reported to have met and discussed the replacement with Mayor Dawn Zimmer recently surely galls Garcia who tried to strong-arm the mayor into handing him a permanent banana republic in the Hoboken Housing Authority. When Zimmer refused to back an "emergency" redevelopment scheme called Vision 20/20 more than doubling the size of the HHA in downtown Hoboken, Garcia launched a vicious lawsuit accusing her of "ethnic cleansing."

Mayor Zimmer never stood down and in the face of the November 2013 mayoral election and at-large council races wouldn't buckle to the political extortion as she cruised to re-election.

A source among the Hoboken citizenry passed along this tidbit last night. Da Horsey might have tried confirming the story, starting with Chaparro fiancé Police Chief Ferrante himself who is preparing for another Leper-con invasion in early March.

There's word the DMW himself will be holding a fundraiser for re-election to the Assembly seat at a downtown Hoboken restaurant early next month. Brian Stack won't be anywhere near the place but Garcia is selling it saying NJ Assembly speaker Vince Prieto is attending.

Will Prieto appear for a drink and a dash or avoid the venue altogether so as to not upset Hudson ally in the NJ Senate Brian Stack?


Following the ruling in favor of the Hoboken bloggers in a defamation lawsuit brought by political personality Lane Bajardi, politically-connected attorney Donald Scarinci -- who once was an opinion-writing editor on his Union Hill High School newspaper in Union City -- came out with an Op-Ed defending bloggers.

In his piece, Scarinci noted the following:
" ... New Jersey is not the only court addressing defamation on the Internet. In the federal courts, the Ninth Circuit Court of Appeal recently held that bloggers are entitled to the same First Amendment protections as journalists with respect to defamation. Accordingly, plaintiffs must prove that the speaker was negligent when publishing the false statement ... "


Talking Ed Note: None of this is going to make sense to some of the dumb as a rock dwindled band of "Masonistas" who know and understand less about NJ defamation law and not once had a bad word to say about any of the vitriol spouted on the heavily censored website Hoboken411 by their "friend."

They very well knew who was ghostwriting the enormous pile of lies and character assassination (or is it defamation) for years at Mason411. Did they ever say a single word against or publicly criticize any of it? They eagerly supported his bile-filled conspiracies of Beth Mason propaganda.

Last prediction: Beth Mason will not be handing the second ward council seat or any City Hall jobs under a Beth Mason mayoral administration to any of her remaining minions. Ever.

Chew on that.
Posted by SmartyJones at Saturday, February 21, 2015