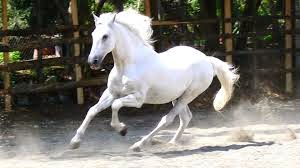 11 And I saw heaven opened, and behold a white horse; and he that sat upon Him was called Faithful and True, and in righteousness He doth judge and make war.


12 His eyes were as a flame of fire, and on his head were many crowns; and He had a Name written, that no man knew, but He himself.


13 And He was clothed with a vesture dipped in blood: and His name is called The Word of God.


14 And the armies which were in heaven followed Him upon white horses, clothed in fine linen, white and clean.
15 And out of His mouth goeth a sharp sword, that with it He should smite the nations: and He shall rule them with a rod of iron: and He treadeth the winepress of the fierceness and wrath of Almighty God.

Posted by SmartyJones at Monday, February 09, 2015