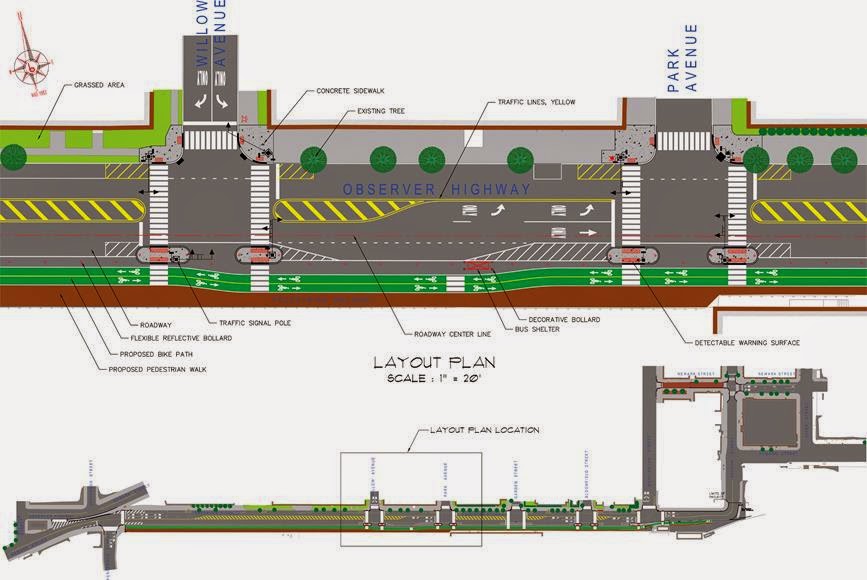 Beginning on or about Monday, April 27, 2015, construction will begin on the Observer Highway complete streets redesign project. The improvements along Observer Highway will include new synchronized traffic signals and dedicated left turn lanes that will create a more organized, efficient, and safer driving experience. Between 2010 and 2012, there were an average of 37 crashes per year along Observer Highway. The new design will reduce traffic delays and prevent collisions. Along with these essential changes, the Observer Highway and Vezzetti Way corridor will be converted to a more pedestrian-friendly street with new, redesigned crosswalk signals and other pedestrian safety improvements as well as a two-way protected bike lane.

"I am very proud that this project, fully-funded through grants, will create an attractive and safe gateway into Hoboken for drivers, pedestrians, bicyclists, and public transit riders of all ages and abilities," said Mayor Dawn Zimmer. “While the main purpose of this project is to make the street safer, it will also have the benefit of reducing traffic delays along one of our busiest corridors.”

The project, which will also include a redesign of a portion of Newark Street later this year, costs $2.7 million and is completely funded by grants. The majority of the funding was secured by Senator Robert Menendez through a $2 million Congressional earmark for Observer Highway and a $240,000 earmark for Newark Street. Hoboken was fortunate to have access to these funds as cities across the United States are now no longer afforded Congressional earmarks.

“Having too often been stuck in traffic myself on Observer Highway, I know what these much-needed upgrades will mean to such a vital corridor in and out of Hoboken. Complete streets accommodate the needs of all roadway users—not just drivers—and this project will help improve the quality of life for residents, make the city more welcoming for visitors and help local businesses grow,” said U.S. Senator Bob Menendez. “That’s why I fought for and secured $2,240,000 in federal funding for the project. A redesigned Observer Highway will make Hoboken’s infrastructure work better for drivers, transit riders, pedestrians, and cyclists."

The combined Observer Highway and Newark Street project is being managed by Hudson County.

“We are excited to undertake what truly will be a transformation of the most prominent county roadway in Hoboken,” said Hudson County Executive Tom DeGise. “The thoughtful input of Mayor Zimmer, Freeholder Anthony Romano and city residents has produced a design that will work better for drivers, bikers and pedestrians. Thanks to our legislative delegation in Washington, led by Sen. Bob Menendez, for securing the needed federal funding for us to move forward with this project.”

How long will the project take and when will it begin?
Work is expected to last approximately 6 months on Observer Highway and will take place weekdays from 8am to 6pm. It is expected to begin on Monday, April 27th, 2015.

How will Observer Highway change?
Observer Highway will continue to be a two-way road. It currently has two travel lanes in each direction. The new street will have one travel lane in each direction plus dedicated left turn lanes so that turning cars do not slow down through traffic. New traffic signals will be synchronized to allow traffic to move smoothly and reduce backups.

How will the completed project impact traffic?
A detailed traffic analysis has been conducted indicating that travel times will be improved as a result of the roadway redesign. The creation of dedicated left turn lanes will remove turning vehicles from through traffic, reducing backups and rear-end crashes and improving the efficiency and capacity of the roadway.

The addition of traffic signals at Park Avenue and Bloomfield Street will aid vehicular movement in and out of the City. The timing on all signals will be optimized and coordinated to increase the flow of traffic, particularly during peak hours. With the new roadway configuration and synchronized signal timing, corridor travel times are expected to improve during rush hour.

By optimizing signal timing, increasing left turn queuing capacity, and removing stopped vehicles from through traffic, average wait times at Observer Highway/Henderson Street are estimated to be reduced by 78% during the morning peak and by 59% during the evening peak.

What pedestrian safety improvements will there be?
Pedestrian safety along Observer Highway will be improved through traffic signals with pedestrian countdown timers, a pedestrian walkway on the south side of the street, new concrete pedestrian islands, new ADA curb ramps, replacing select curbs and sidewalks, high visibility crosswalks, and parked cars on either side of the roadway acting as a buffer between traffic and pedestrians. A new sidewalk will be added on the north side of the intersection with Henderson Street, providing safe haven for pedestrians walking on the south side of Newark Street. All pavement markings will be striped in long-lasting, highly reflective thermoplastic which will increase visibility of crosswalks in all conditions and reduce the need for annual restriping of faded paint-based markings. The new configuration will make it significantly easier and safer to walk along or cross Observer Highway.

Is anything being done about the flooding in the parking area on Vezzetti Way?
As part of the project, drainage improvements will be made to eliminate existing issues that result in pooling of water on the roadway.

How was this plan developed?
The project was planned through a series of community meetings in 2010, 2011, and 2012 and incorporates the goals and recommendations of Hoboken’s Master Plan, Complete Streets Policy, and Bicycle/Pedestrian Master Plan.