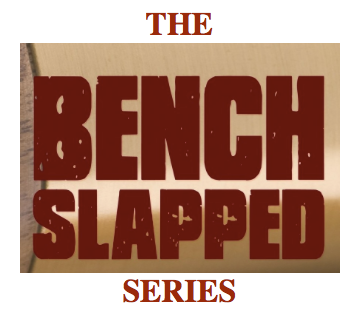 The unofficial summer has kicked off with glorious weather but Da Horsey grew green with envy in the Bench Slapped email incorporated into an uproariously hilarious satirical graphic by Grafix Avenger.

So MSV dug into the tens of thousands of emails to toss one out onto the barbie and grill up some Masonista loving censorship to couple with the lovely weather.

In March of 2012, the efforts to derail the First Amendment in Hoboken was a full force Masonista endeavor. Mere months later, numerous well known Hoboken commenters would see their names appear in the Lane Bajardi and Kimberly Cardinal Bajardi lawsuit unceremoniously announced by Beth Mason herself in the July 2012 City Council meeting.

Beth Mason's announcement of war on the First Amendment went completely unreported then and now. The Hudson Reporter featured her prominently in its story when the civil litigation when it exclusively reported each and every one of the Hoboken commenters was on the hook for $2,000,000 each. (That claim was incorrect and proved ludicrous when the case itself was thrown out of court noting the lack of evidence mid-trial.)

Most of the Hoboken commenters named in the SLAPP shared one thing in common outside of their anti-corruption mindset, Old Guard and Beth Mason skepticism having absolutely nothing to do with defamation; they would never see a single allegation made against them as required under NJ law.

Their collective guilt was however clearcut among censorship loving Masonistas who went on an anti-speech rampage on Hoboken Patch while perhaps awaiting an answer to their funding appeal for the SLAPP.

Here is the special moment of the shared Masonista loving censorship discovery. Hoboken411 having been used, abused and all but destroyed for its single-minded Gestapo like tactics on speech, the Masonistas moved on to Hoboken Patch, their new obsessive focus.

Here's Kimberly Cardinal Bajardi and her friend sharing that special moment when the Joys of Censorship is birthed on Hoboken Patch. The scientific "discovery" is shared in the emails titled, "Re ha ha ha!"

Dozens if not hundreds of comments would later vanish at the hands of the Masonistas. 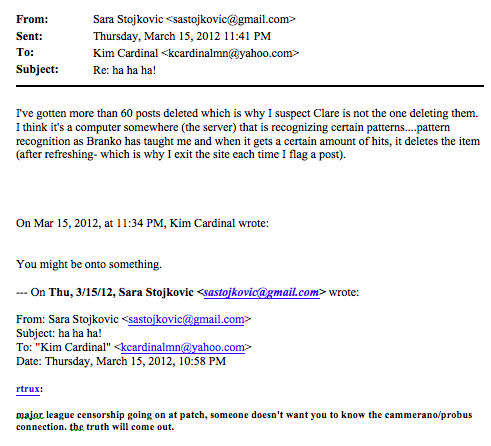