According to the owner, Room 84 is not able to accommodate the machine which would need to go to the basement where committee members will be voting.

Joe Branco the owner of the club who also is a current Hoboken Democratic Committeeman noted a problem getting the machine to the basement and other locations inside would block the public egress and weren't suitable.

The elevator's use is restricted for reasons Branco declined to detail due to litigation with the landlord.

Another possibility would have been to set up an outside tent with the machine but was that too is said to be unpalatable due to possible late rain. 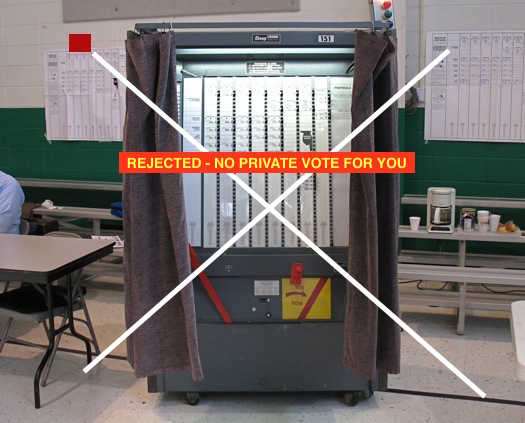 Talking Ed Note: On with the show, this is it. Councilman Michael Russo may be seeking a nod for Vice-President in the vote tonight.

The question of a "honorary" chair typically done for outgoing politicians is unknown. Most other Hudson municipalities don't regularly name an honorary chair. But hey, this is Hoboken.

Update: Grafix Avenger has an updated story on this snafu and says, the plot to undo a voting machine was in the end foiled.
Posted by SmartyJones at Monday, June 08, 2015