Anatomy of a frivolous litigation with Beth Mason, Lane and Kimberly Cardinal Bajardi

The decision rendered this week in Hudson Superior Court on Hoboken bloggers (commenters) is monumental on two fronts: NJ rights to political speech and frivolous litigation.

First and foremost, there is no longer any lingering mystery about this Beth Mason supported SLAPP-suit.  In August 2012, the Hudson Reporter said this case could be of national importance and pointed to one example of a Washington State case where a single comment led to a negative verdict against a blogger.

This week's First Amendment triumph and enforced standard against frivolous litigation wasn't what the Hudson Reporter editors and publishers had in mind. After failing to publish MSV's comment published by every other local news outlet last February without explanation, they again asked for comment. A quote was submitted.

Their February story when the case was thrown out of court mid-trial described plaintiff Lane Bajardi as a "victim" although this was civil not a criminal case.

The 32 page legal decision made all that rhetoric moot rendering this SLAPP as "frivolous... bad faith, (for) harassment, delay, and malicious injury."  It followed with a harshly worded damning conclusion: 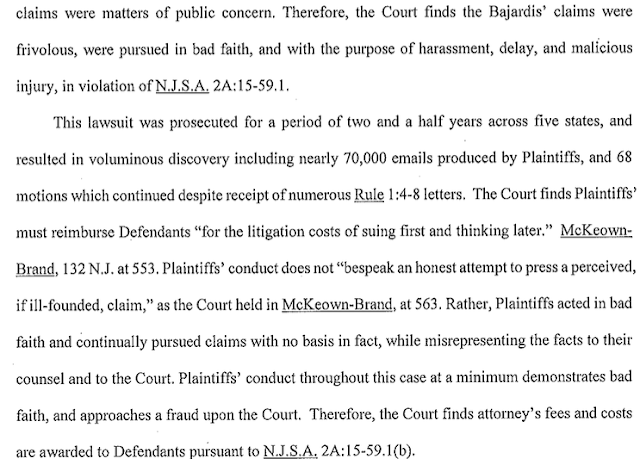 At the May hearing for legal fees and sanctions, Judge Patrick Arre remarked with some exasperation, "there is no evidence of anything" in response to one of several pro-Bajardi attorneys rhetorically inquiring how the case could be frivolous when it made it to trial.

The Hudson Reporter had incorrectly reported right in the lead of its story, Lane Bajardi had only come up short to "provide enough evidence," even as the case never made it to the jury.

MSV inquired how such an editorial conclusion was drawn and publicly issued 30 questions seeking answers. Not a single answer to one was offered in return.

Like Lane Bajardi, the editors and publishers of the Hudson Reporter make their living off the First Amendment but unfortunately appear to have a rooting political interest overriding political speech rights. They also share a never say die attitude of support for the very controversial Beth Mason who appears to be mounting a suicidal re-election council campaign effort.


Analysis on the two fronts: frivolous litigation and First Amendment is significant in what some legal observers expect will approach precedential NJ law and make famous (or infamous) those involved in Bajardi v. Pincus.

Some inquire how those details break down in terms of amounts awarded to each of the trial defendants. It's rather simple. A legal requirement to win a frivolous litigation award at the conclusion of a case requires a letter be issued to the opposing counsel earlier.

While the legal decision ruled the entire case frivolous with Lane Bajardi and Kimberly Cardinal Bajardi "misrepresenting" to their lawyer(s), the date of frivolous litigation letters was the benchmark for the clock to start ticking on legal costs.

Legal fees accrue 28 days after the issuance of the frivolous litigation letter. The amounts set by the Court under NJ law do not allow for any additional punitive damages. The damages are limited to granting the motion solely for legal fees and any sanctions imposed separately on attorneys.

On behalf of Grafix Avenger, attorney Michael Plumb of Carter & Ledyard similarly filed a frivolous litigation letter in 2012. Pro se efforts are not billable and other resources covering legal fees left only 26K filed in that final motion, granted and awarded in full.

On behalf of MSV, after efforts to have the SLAPP-suit withdrawn failed, attorney Alex Booth filed a frivolous litigation letter in 2014.

The screen names had to fight the hardest legal road. They had to oppose the multi-pronged attack on their anonymity which was attempted not in one but multiple states. Lane Bajardi and Kimberly Cardinal Bajardi had their attorney file actions in California, Virginia and New Jersey.

Who files an action forcing defendants to defend the same claims in three different states at the same time? Only a well-financed litigation would even think of attempting to do so. Do you think that tactic would be attempted by a sole breadwinner in a family of three making $125,000 a year who had been mostly unemployed as his wife remains for most of the prior three years to the litigation's filing?

In all, defendants faced 68 motions in this three year litigation, an absurd amount by any standard and a classic example of what's called "checkbook litigation." The Court determined this SLAPP-suit rendered defendants victims of a frivolous litigation designed to "harass, delay and (inflict) malicious injury."

MSV was contacted by the Hudson Reporter this week and on background explained how the court granted all three motions to the defendants and the method of frivolous letter dates set the award determinations.

Back in August 2012, the Hudson Reporter prominently featured Beth Mason, quoting her remarks about her "friends" - Lane Bajardi and Kimberly Cardinal Bajardi - shown deeply involved in Hoboken politics on every conceivable well-funded Mason political operation. Over 7,000 emails alone are between the Bajardis and Richard and Beth Mason and the subject of MSV's exclusive BenchSlapped Series: http://www.hobokenhorse.com/p/emails-contained-here-are-part-of.html

In the same Hudson Reporter story, Pincus is quoted calling the lawsuit a SLAPP and the story highlighted MSV had published the same accusation here on this website.

With the complete, devastating legal decision issued by Hudson Superior Court on Wednesday, do you think the Hudson Reporter will say Grafix Avenger and MSV were right all along?