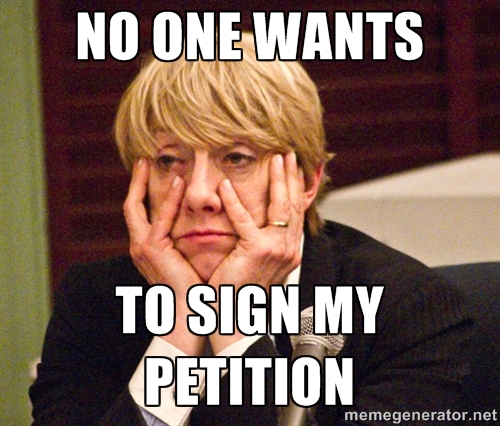 Responses from passersby on the whole ranged from outright fleeing, refusal or "hell no" according to eyewitnesses.

If the paltry required 100 signatures are filed by the August 31st deadline, Beth Mason will get to deliver her unique brand, what one Union City Judge called "Hudson County dirty politics," a Mason family funded specialty.

Back in 2011, Mason's former mayoral campaign manager recounted her comment, "What's the point of being the 2nd ward Councilwoman? Her efforts to obtain any higher political office has been stymied at every turn.

Recently Beth Mason's paid political operatives were spotted outside her "Civic Association" which she claims as a 501(c)(3).  Both Matty and her chief political operative FinBoy were seen closely monitoring a children's lemonade stand.

Perhaps they were studying techniques in how to squeeze a lemon. They certainly are learning how to wring every last drop out of Hoboken's biggest sour puss.

Talking Ed Note: Signatures will be obtained one way or another which will make Hoboken's uptown second ward most entertaining come November.

One can only savor the retelling of Beth Mason and her ignoble political operatives, their emails, the Nazi truck, record setting campaign fines, plots to destroy Hoboken's finances and the local hospital, the lawsuits, etc.

MSV published some of the tens of thousands of emails made public in court filings in the Bajardi v Pincus civil litigation thrown out of court mid-trial last February.

Mason was prominently featured (before any named defendant mind you) in the Hudson Reporter story on the lawsuit and tesitified none of her City Council salary or Civic Association "charity" covered the Bajardi's legal costs estimated in the hundreds of thousands of dollars with a bevy of lawyers spanning six states including New York, New Jersey, Ohio, Pennsylvania, California and Virginia.

The total cost of the failed civil litigation is believed to be in the ballpark of $1,00,000.

Both Lane Bajardi and Kim Cardinal Bajardi testified under oath they could not recall or explain the legal costs of their lawyers.

Beth Mason has been silent on the verdict avoiding requests for comment.